So this visit breakdown is mad late since it happened last spring. In May I visited the Eli & Edythe Broad Art Museum at Michigan State University which is located in sunny East Lansing. I visited for two reasons, one the building was designed by one of my favorite architects, Zaha Hadid. Her creations are so beautiful and inspiring and the fact that a city so close to me has one, I couldn’t pass up the chance to take in her work. Secondly, the museum was holding a show called Pattern Follow the Rules. The show “examines the recent reinvigoration of pattern-based art practice.” So much of what my work is inspired by are patterns, in particular material that takes a pattern to enhance performance of it. So check out the images below to see the building and the show and good luck seeing it in person because it ended on June 23, 2013. 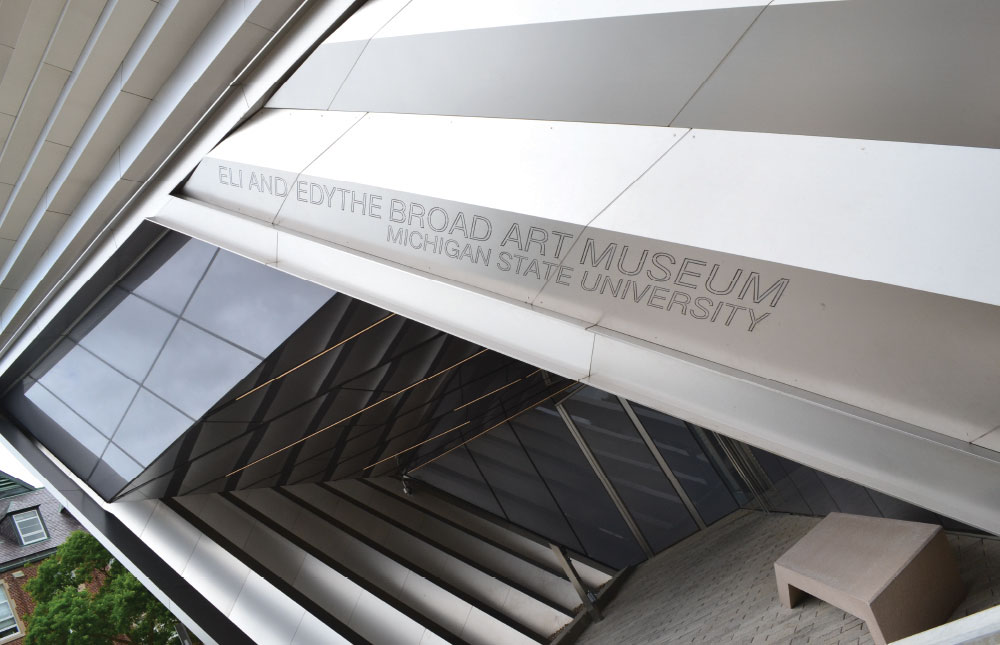 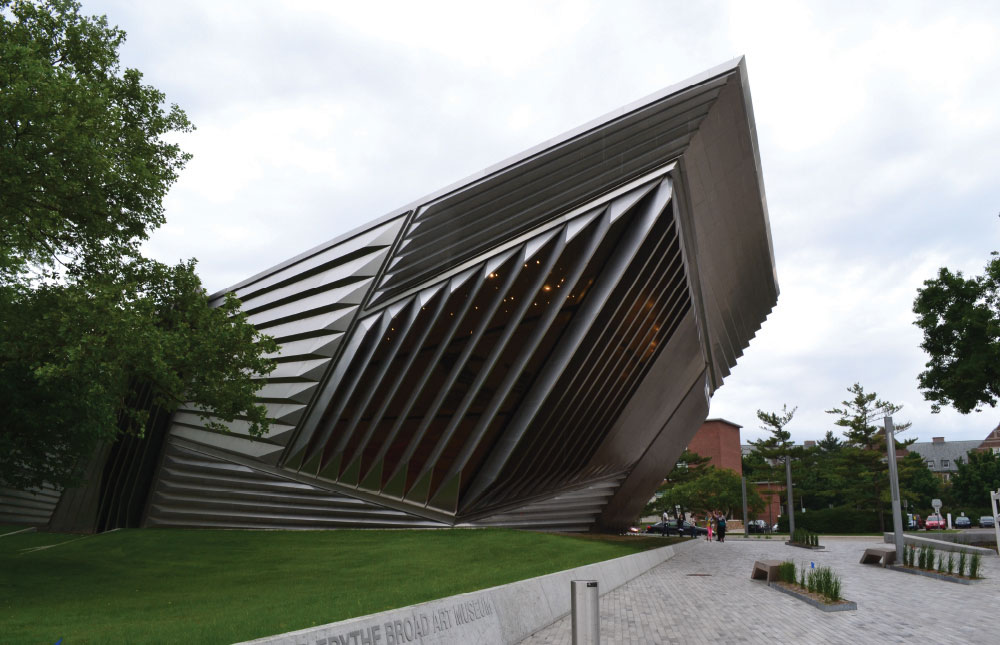 Who says the midwest doesn’t have great design?! 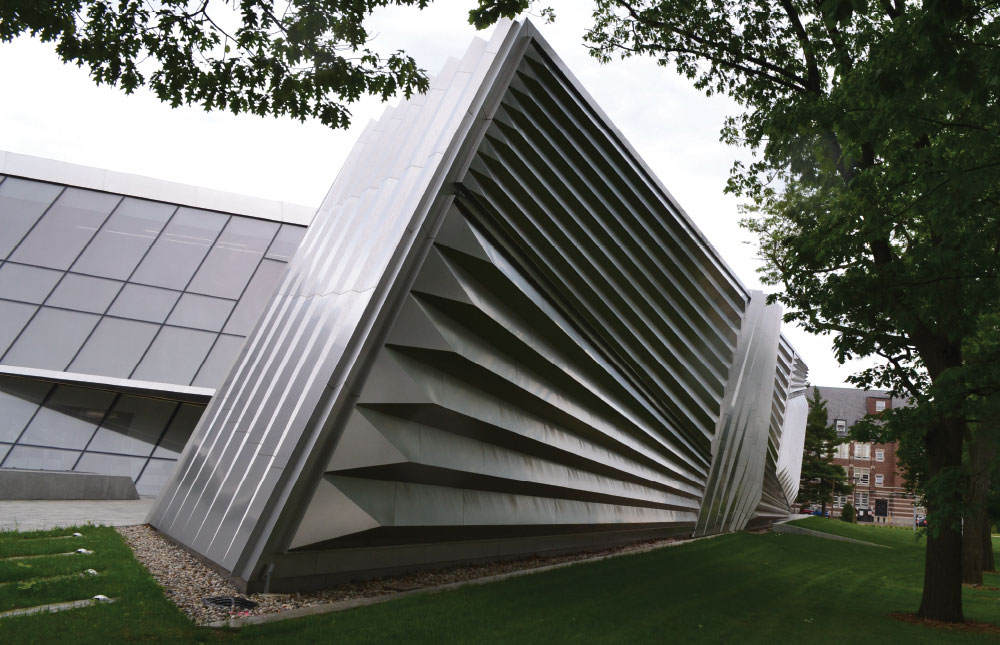 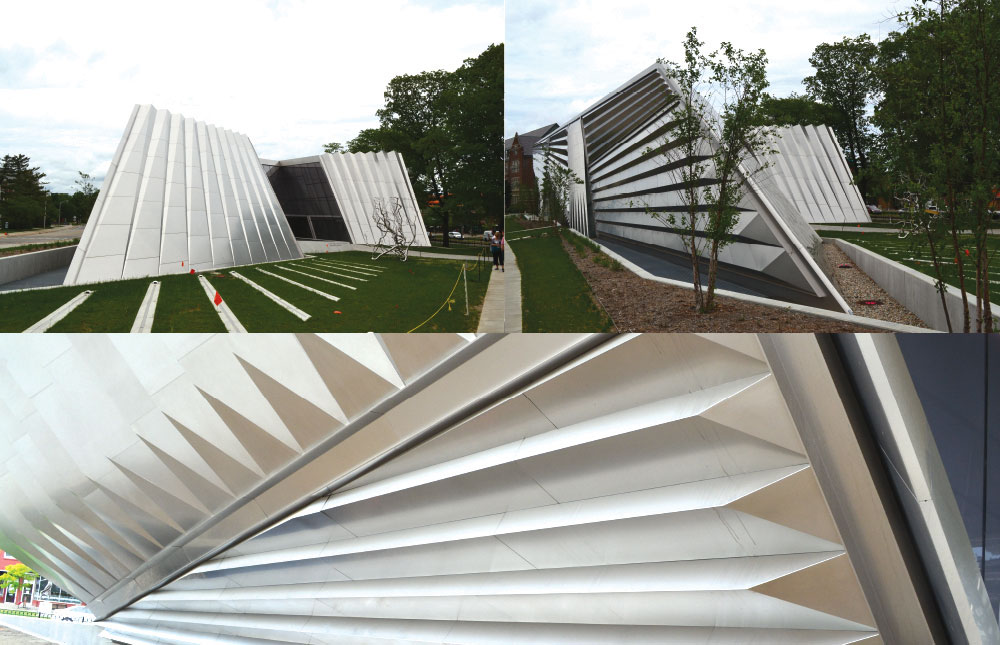 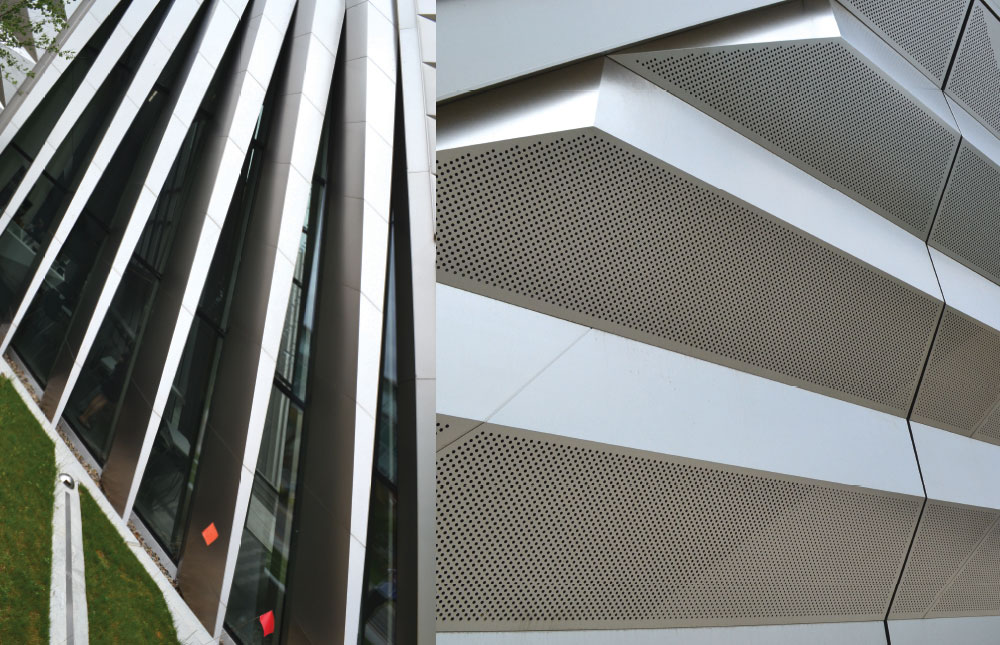 To say that the building is awe-inspiring is an understatement as it does not lack in presence. There isn’t an area that isn’t designed, which makes all of the details beautiful. Architecture is by nature optimistic as it provides a vision for what the future could be. What I found most intriguing about this building is that it is designed with a dramatic lean that goes from east to west. Which would also be the direction sun rises and sets. Nice little detail. Plus the building is a steel-plated construction that integrates its seams into the overall aesthetic, thus making the design appear seamless. 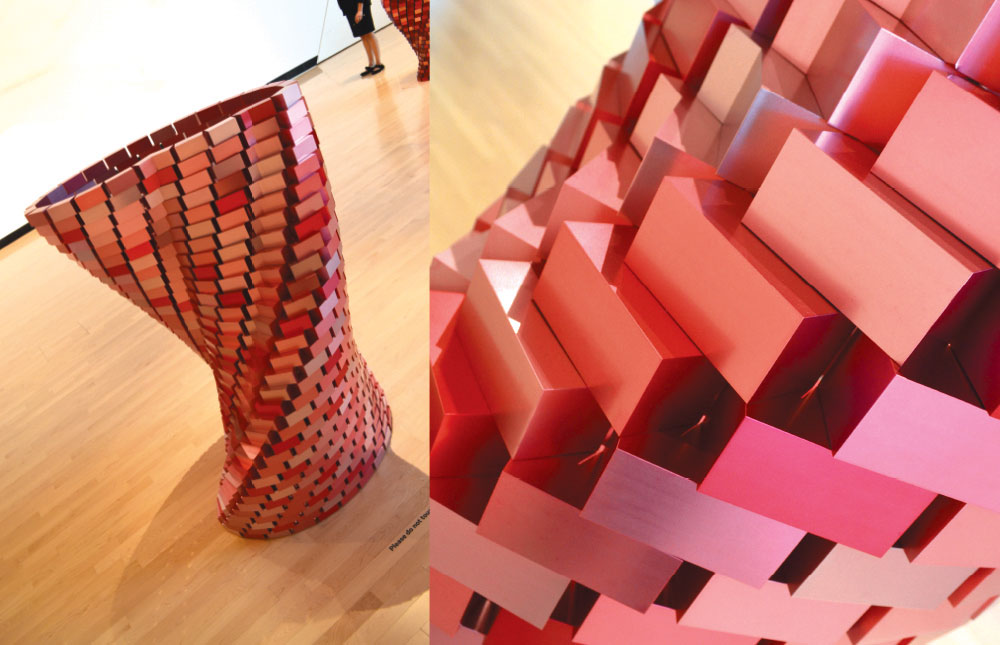 Sheer by Shirazeh Houshiary | Uses anodized aluminum that are individually pieced to create its form. It’s pretty beautiful how a collection of repeated geometric shapes can create something so organic. 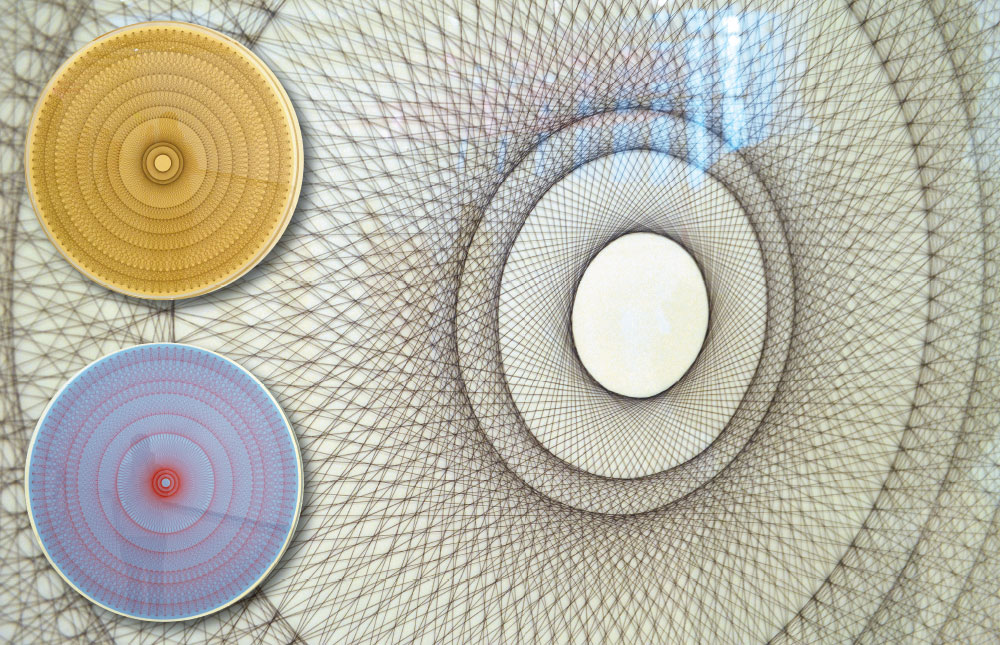 The Series Star by Zilvinas Kempinas | A series of creations that use plywood, nails, fishing wire and resin to create intricate detailed geometric patterns. Flyknit anyone? 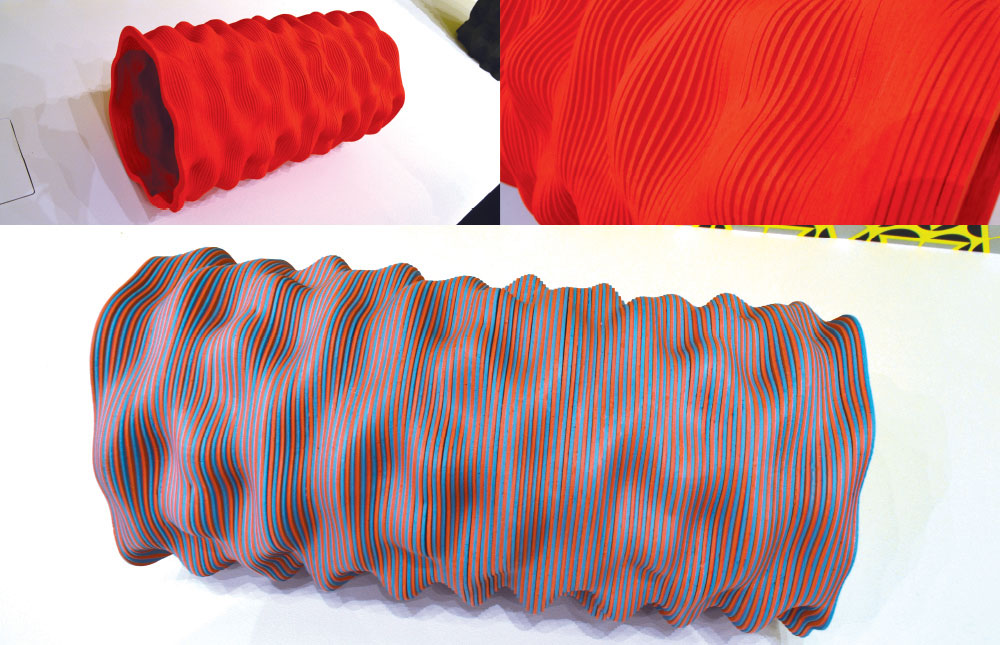 Blue/Orange Roll by Ara Peterson | When I first walked up to these forms I thought they were 3D-Printed but I was completely wrong. It is individually cut wood pieces that are painted with acrylic paint. I thought it was pretty impressive how by cutting the pieces individually and using them to grow the form would create such a soft aesthetic from an unpliable form. 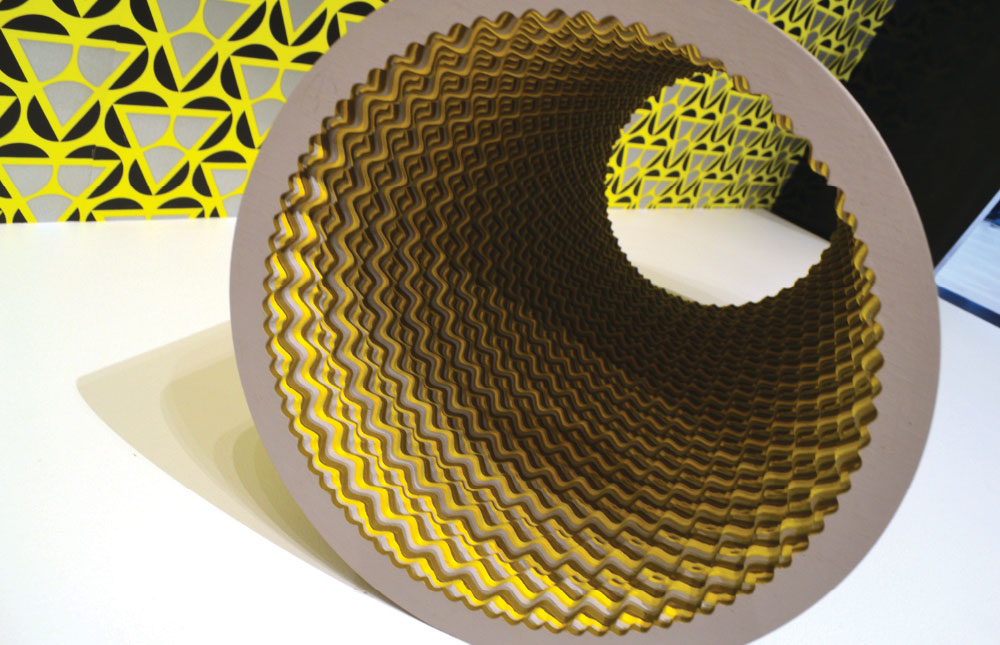 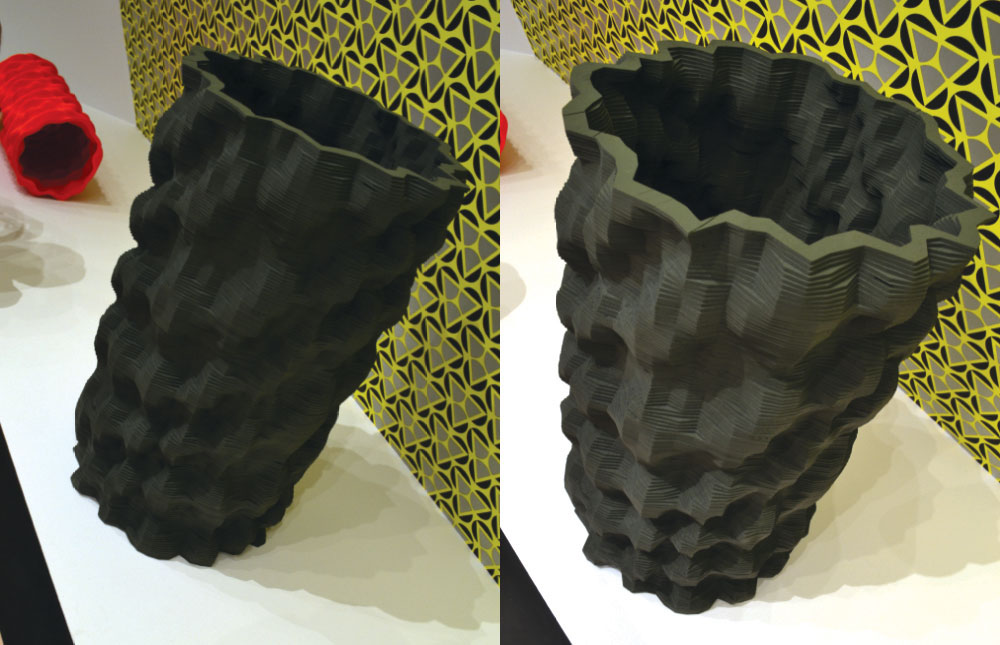 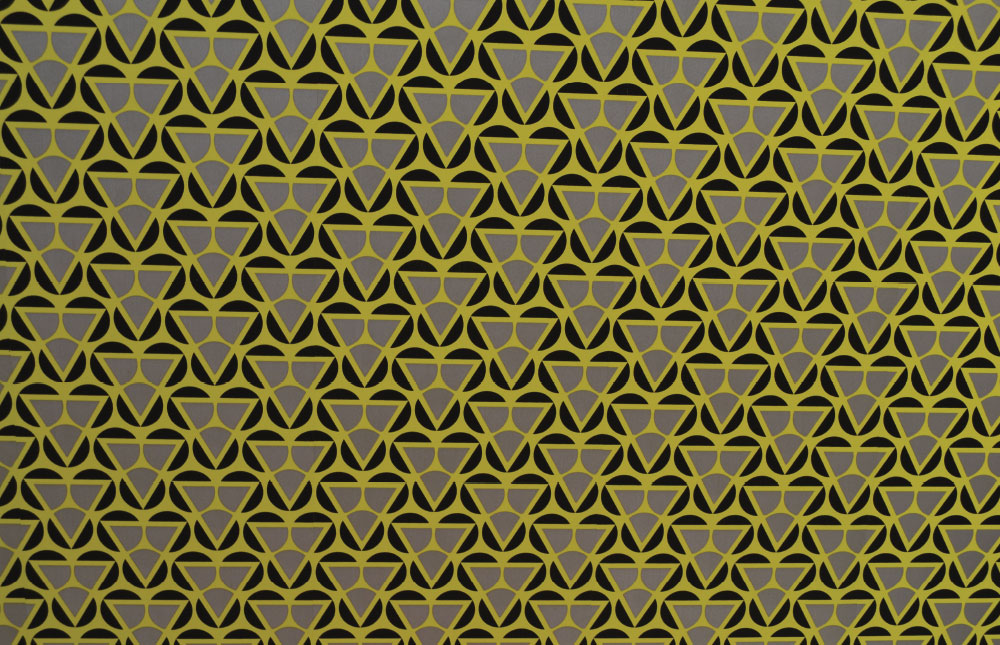 Yeah that graphic is hand painted. Would make for a great traction pattern or lug detail on a track spike. Just a thought… 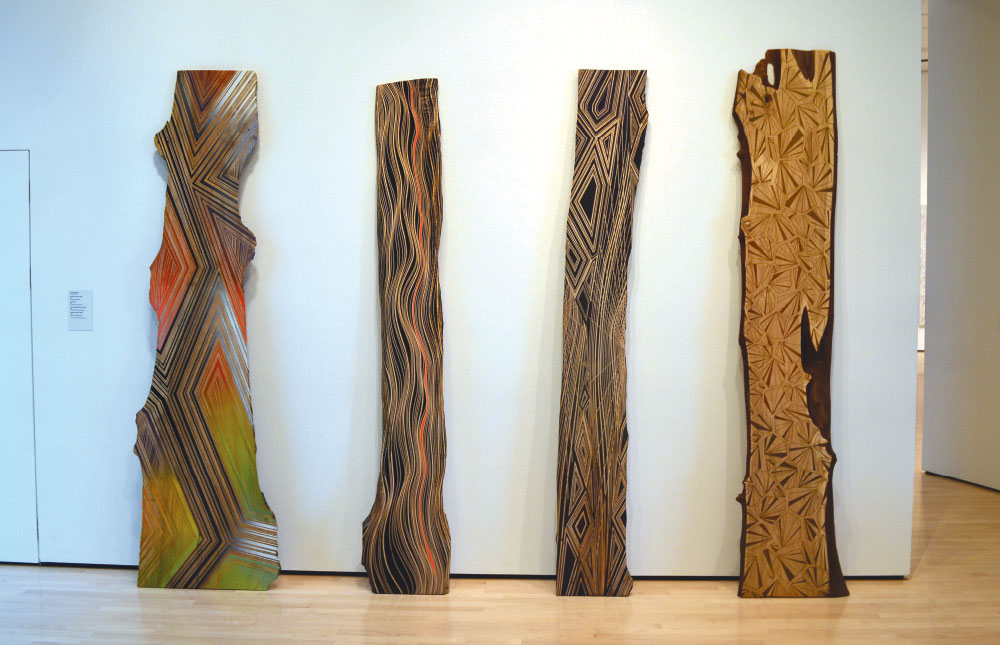 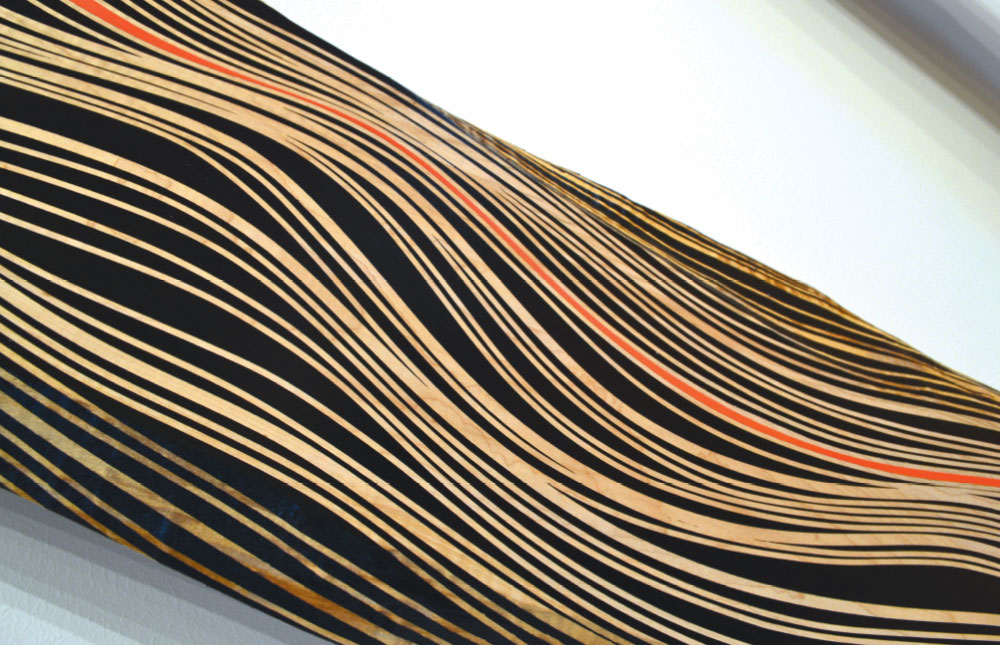 Another Vein by Jason Middlebrook | This series was pretty unique. While I didn’t love the graphics on all of them, I was pretty inspired by the amount of depth they created on a flat surface. In particular the detail shot I took above. It’s amazing how just simply line movement and varying stroke weight can make it seem like the wood is full of knots. 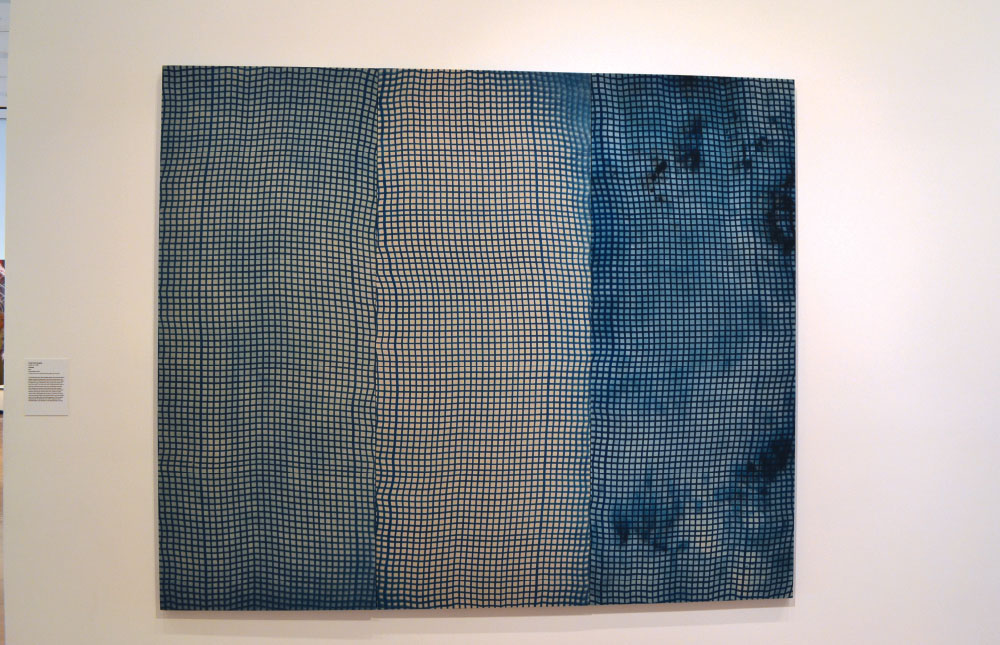 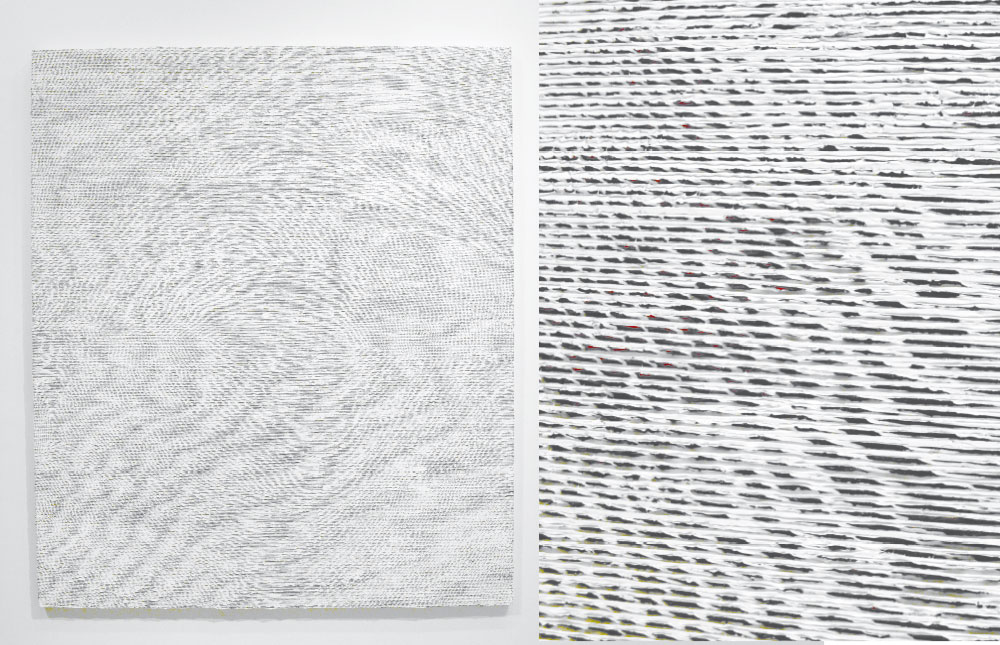 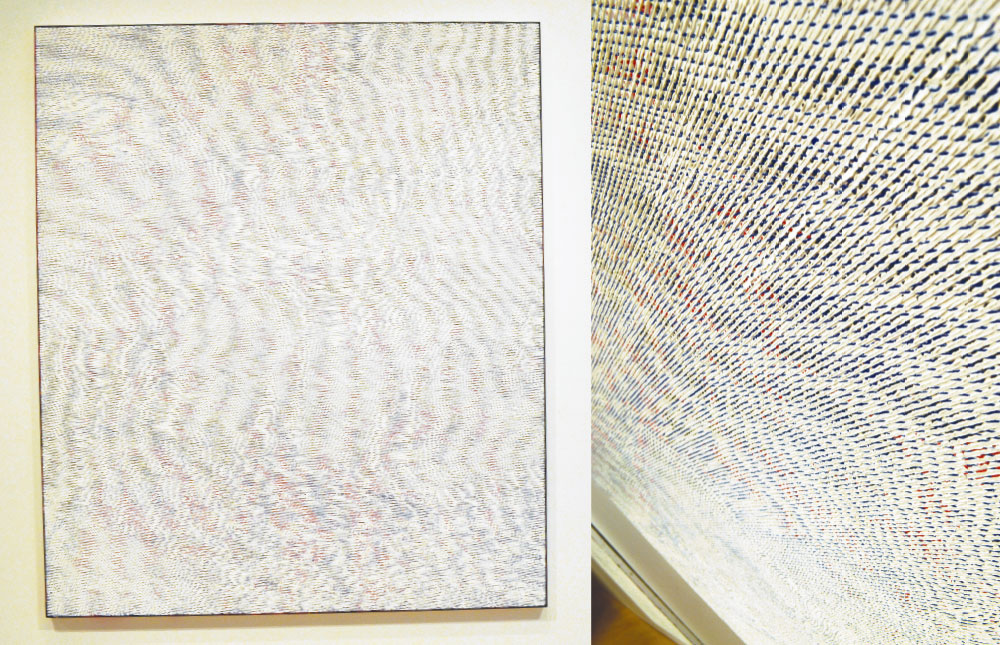 Artist & Piece Title unknown | I thought the overall graphics were amazing. It reminded me of what a channel that doesn’t have reception looks like from back in the day. It has a lot of movement to it. It was amazed it how thick the paint was. It had to be at least a quarter inch thick or more. 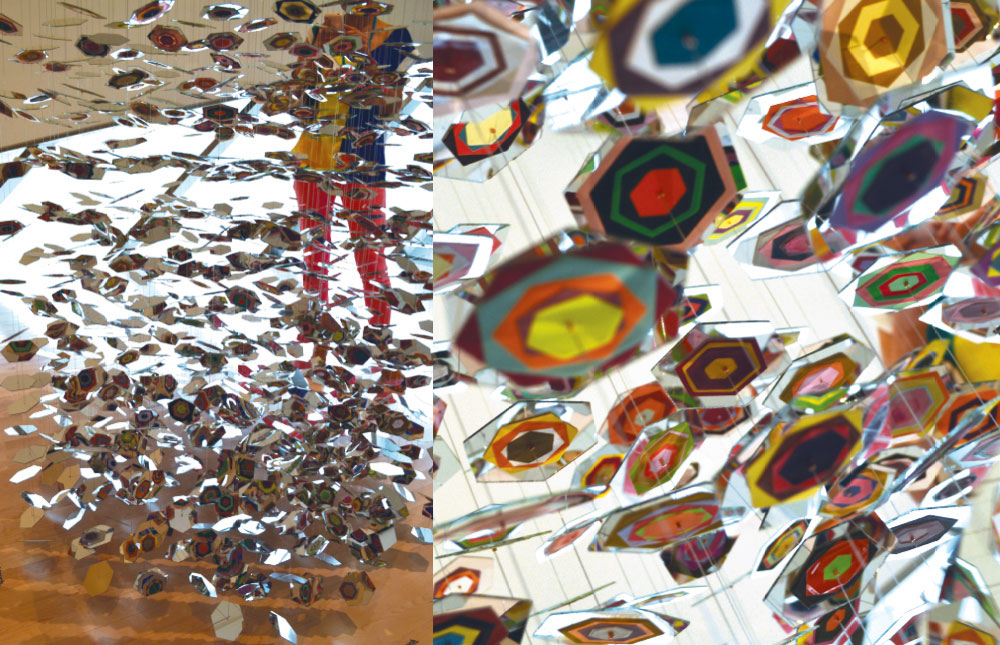 Artist & Piece Title unknown | While it is incredibly intricate it seems to be easily made. Which proves to me the cleaner and the more sophisticated a pattern is the more successful it is. By using mirrored surfaces and then suspending another surface with various sizes and shapes of colors below it, the color reflects throughout the whole piece creating quite the stunning visual. 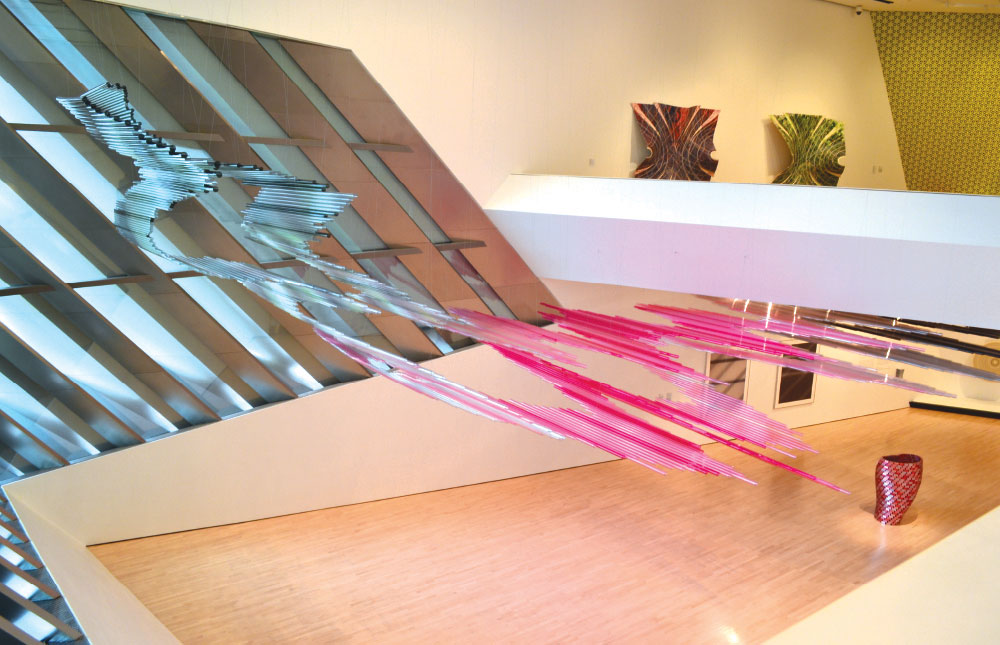 Night Writing by Teresita Fernandez | Pretty impressive sculpture that is suspended from the ceiling of the museum. It looks it was created from plastic tubing. Extra props for the sophisticated color gradient. Quite impressive!

Finally this bench was located inconspicuously downstairs out of plain sight. Which is a bit of a shame because it so beautiful. It was created by Zaha Hadid to bring a bit of the exterior styling into the inside in a functional way.