For the second day of my adventure in Chicago, we the Jordan Brand group, met up with the Nike Basketball group to go on a day of basketball enlightenment around the city. Not shown here is our lunch at Gino’s East.The pizza was dope but more than that was our special lunch guest Scoop Jackson.

I grew up on Scoop’s words, from SLAM! issue after SLAM! issue to the greatest book ever Sole Provider. That man has filled me with more basketball and footwear knowledge then anyone I know. Hearing him speak put new perspective to his words as I found him way more inspiring then I ever expected him to be. Not that I thought he would be boring but I never expected to have him be so captivating. He pulled in the whole group and had us all hyped to be taking in the city of basketball. 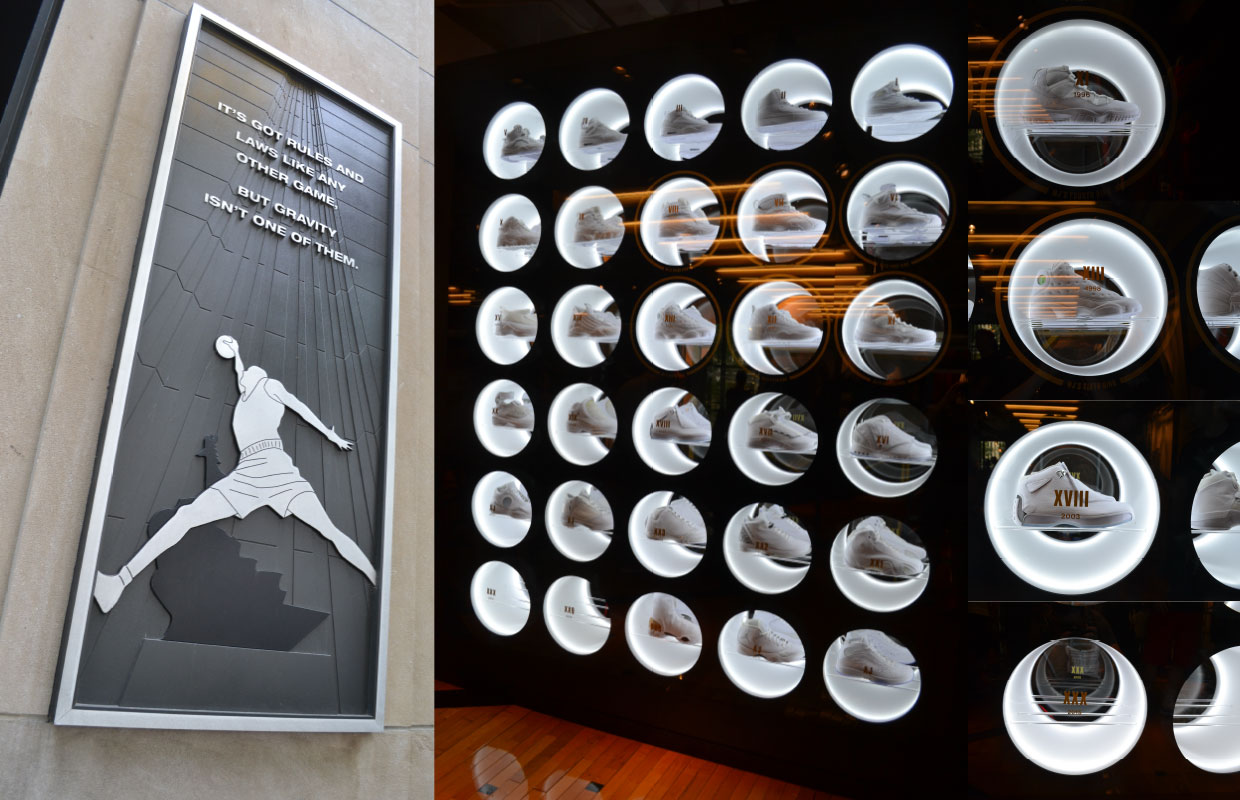 We began our day at NikeTown to get a first and exclusive look at the new Jordan space within the store. It was pretty ill, I would highly suggest you going to it if you are in the Chi. It gives a great retrospective of the Air Jordan line and a great look at where the brand is going. 2015 is coming very soon. 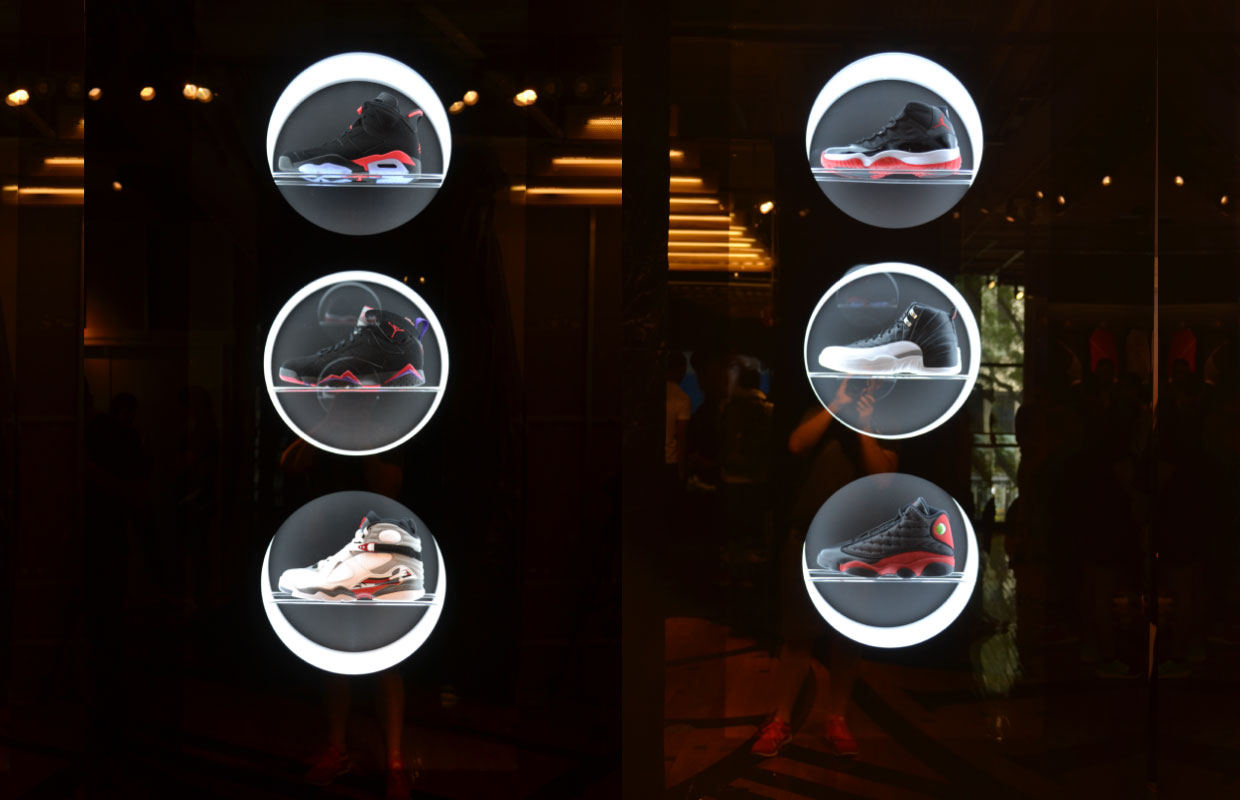 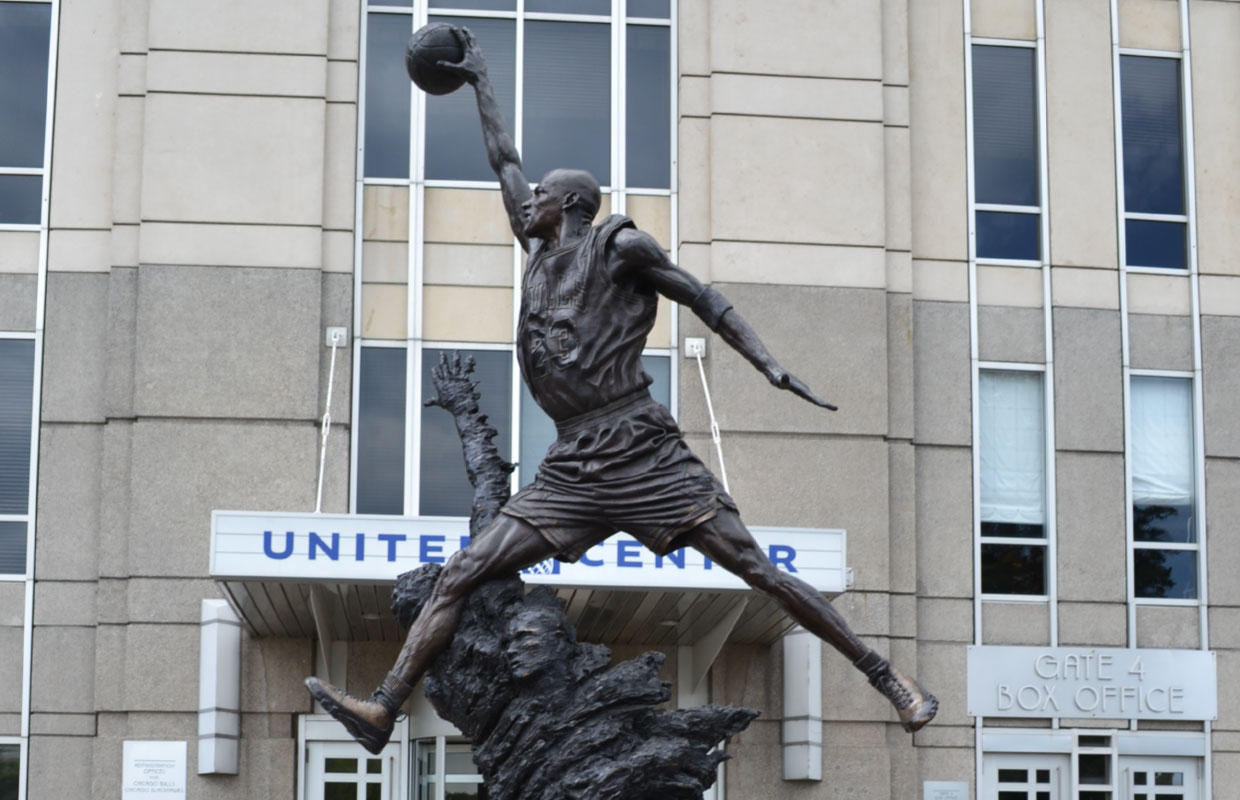 Next we made our way to United Center. I haven’t been here since a child so it was great to get a chance to take in this statue as an adult. Seeing this brought my youth full circle and made me really grasp that there will never be another player that has had a such a large effect on sport globally. Anyone doesn’t think that Michael Jordan changed the game needs to take a tour of the city and specifically the United Center. Just like his statue says, “The best there is, the best there ever will be”. Word to Bret “the Hitman” Hart. 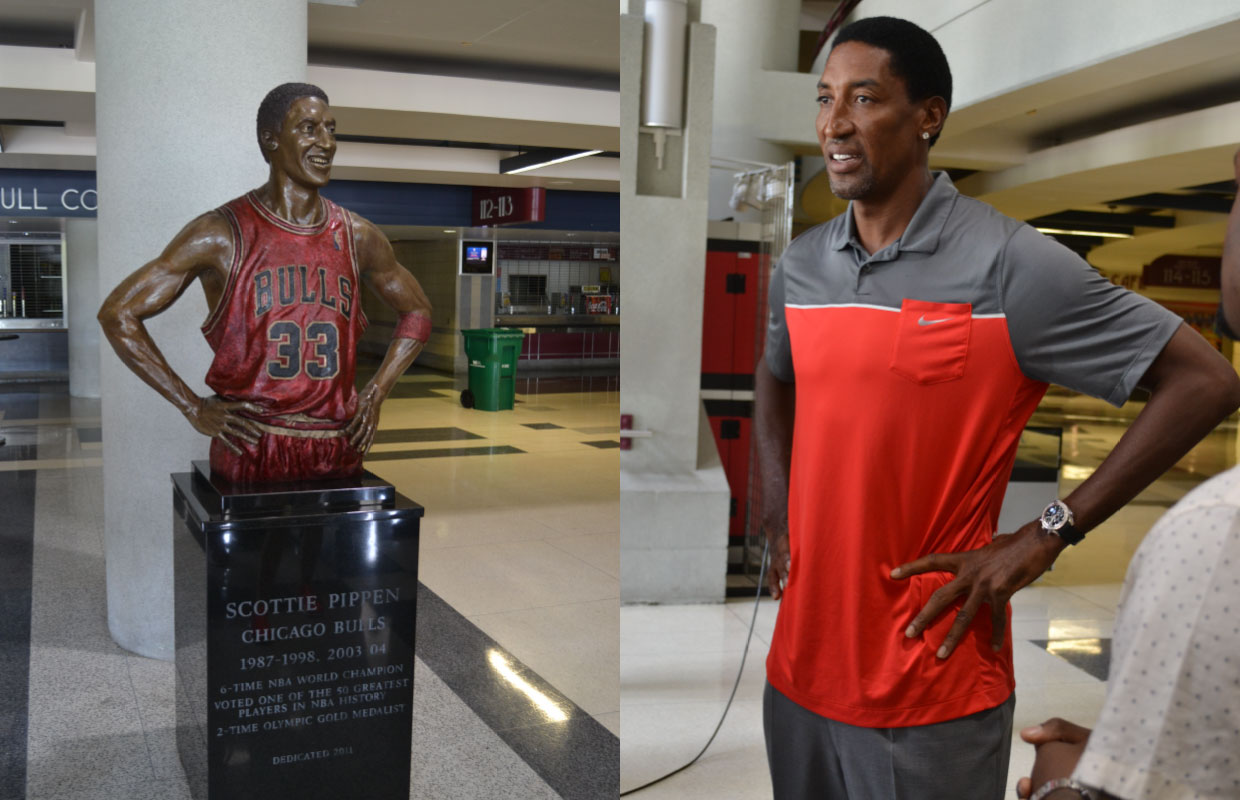 So we got a private tour of the United Center from a gentlemen on staff there, I have to apologize because I can’t remember his name but he is from Indianapolis so that was dope. He led us around the building telling us unique facts about the building and led us to Scottie’s statue. While it doesn’t have the presence of MJ’s it was still pretty dope. As we were taking it in out came the man himself. I must say they nailed his stance perfectly. 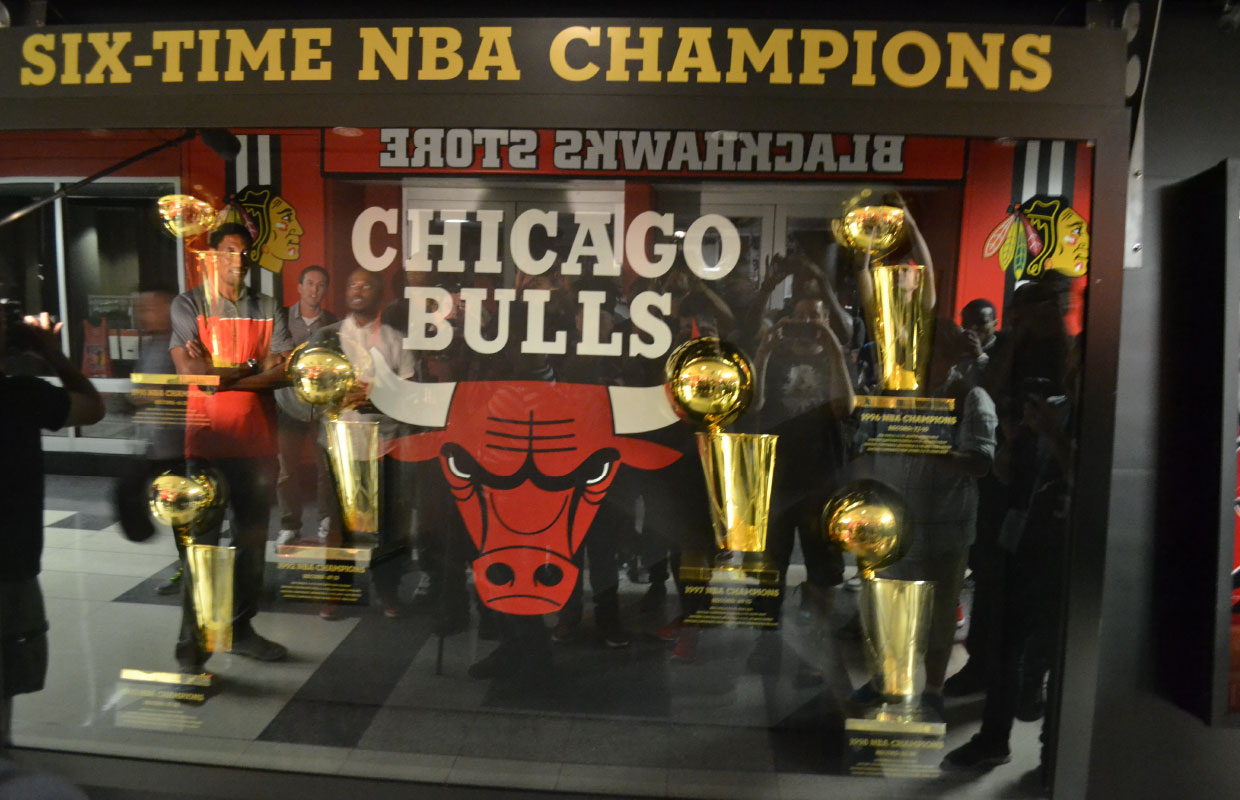 First place Scottie led us to was the six championship trophies him, Michael and the rest of the Bulls won in 1991, 1992, 1993, 1996, 1997 and 1998. He was asked about their most dominant season in 1996, the 72-10 season. He was talking about how everyone was inspired and they were all on the same page to win as many as they possibly could. He said for the ten games they lost, they probably could have won but at the same time there were a lot of games they shouldn’t have won. He did point out that Michael was extra motivated that season for basically costing them a seventh ring. He said it sarcastically but the reality is that they should have eight rings in a row. 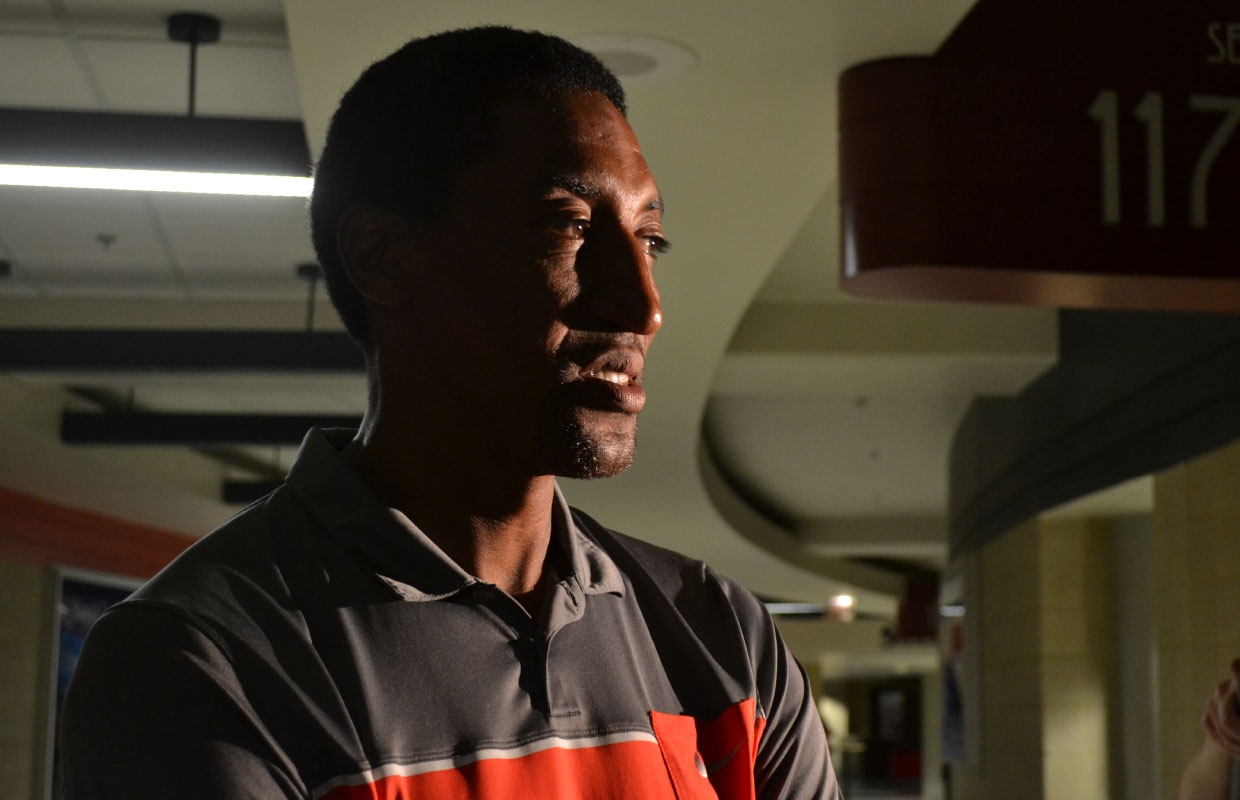 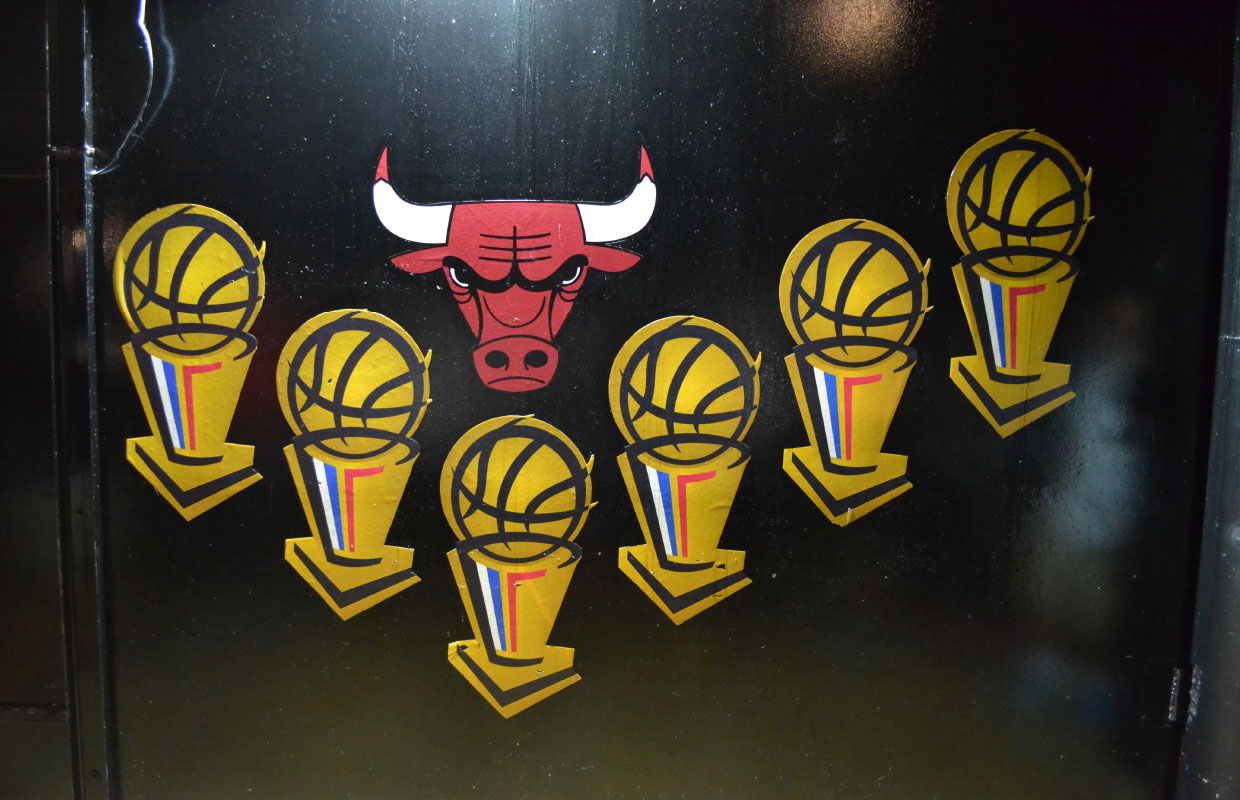 This is painted in the exact area where the Bulls would start their night but chanting, “WHAT TIME IS IT?! GAME TIME, hoot!” FYI Cliff Levingston started that chant. 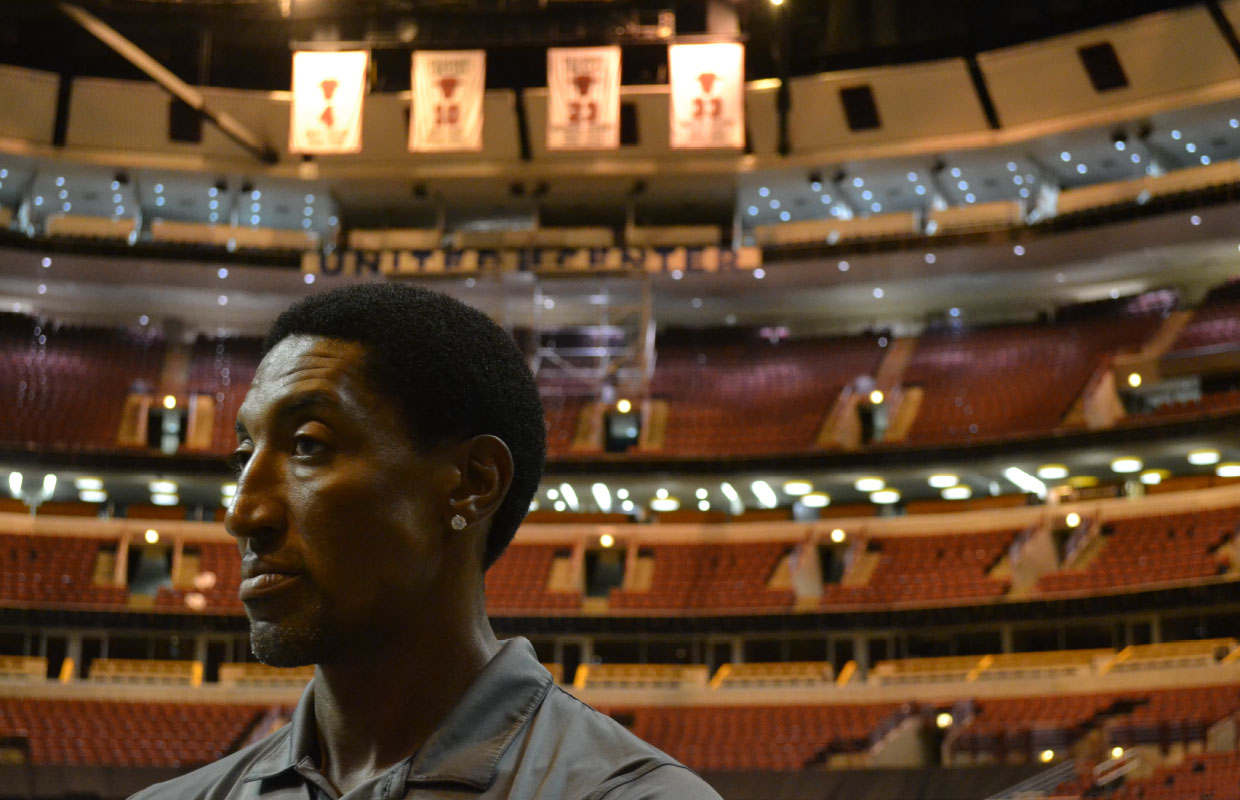 Scottie led us to the court area, the court wasn’t out because they were preparing for a Miley Cyrus concert, but he did speak about his retirement celebration and how special of moment it was for him. We were also able to ask questions. I spoke with about his signature line and what it meant to him. He basically said they were just shoes to him but he really enjoyed working with Nike. I specifically asked him about Aaron Cooper and what that relationship was like he really didn’t say too much in depth other then Aaron made the experience amazing.

Which leads me to something I have felt for a while, very rarely do athletes associate themselves with their signature line. I truly believe that most athletes see their shoes as a tool and nothing more. Which to me puts into perspective the emphasis that we sneakerheads and media put on these shoes. I find it interesting that something we love so much and put so much thought into is merely just an object to the athletes we associate them with. I could be reading too much into what he said to me but I have had similar comments made to me by Melo and CP3 and a lot of runners I worked with back in the day at New Balance. It may not be this way for every athlete but I do believe it is for the majority of them. 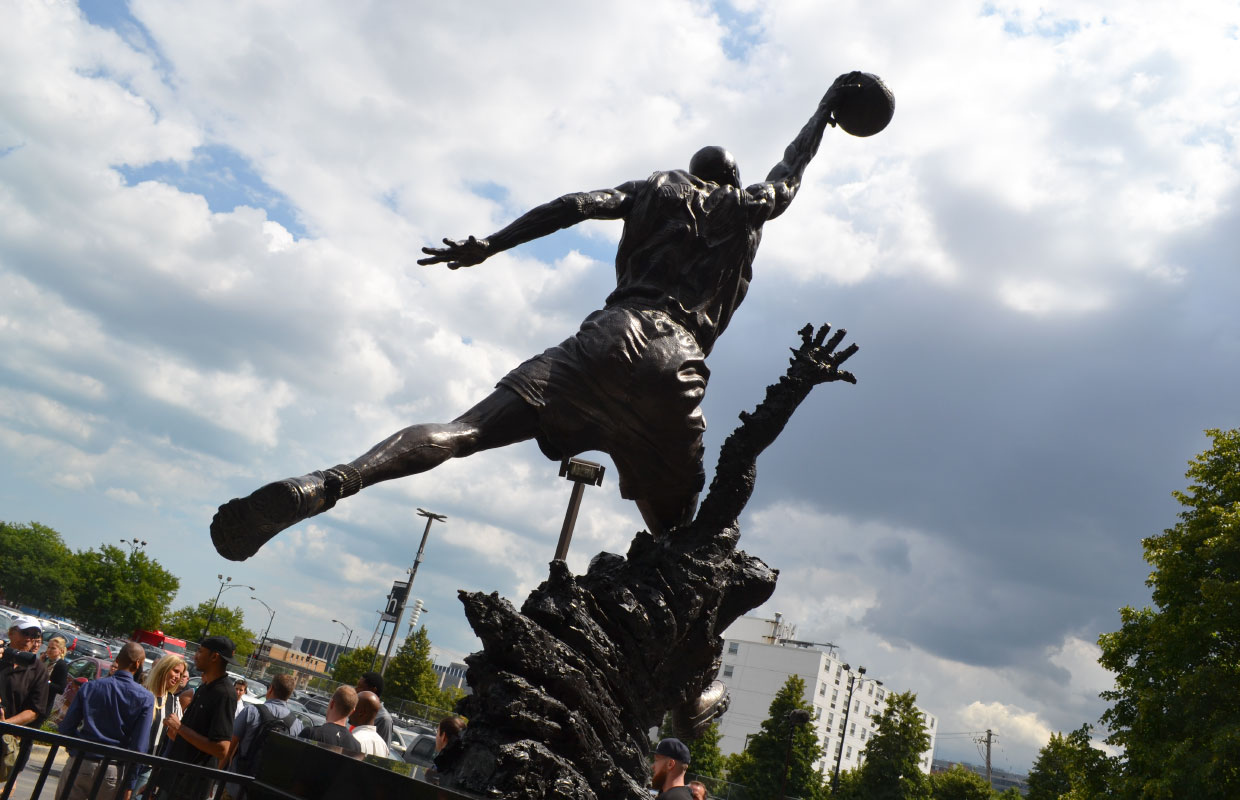 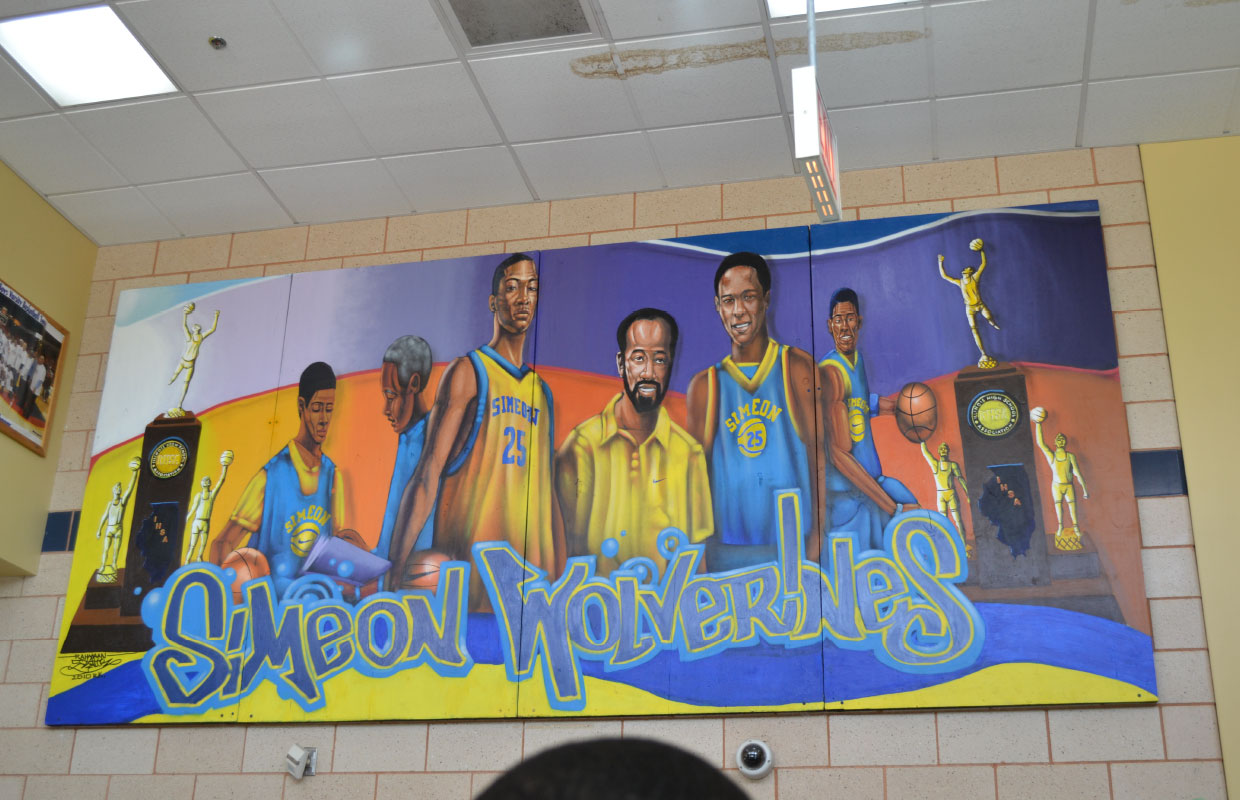 Next we visited Simeon High, the high school basketball mecca that has bread a lot of championships in the state of Illinois. The school has bred such NBA players as Derrick Rose, Anthony Davis, Jabari Parker, Nick Anderson and rapper GLC. 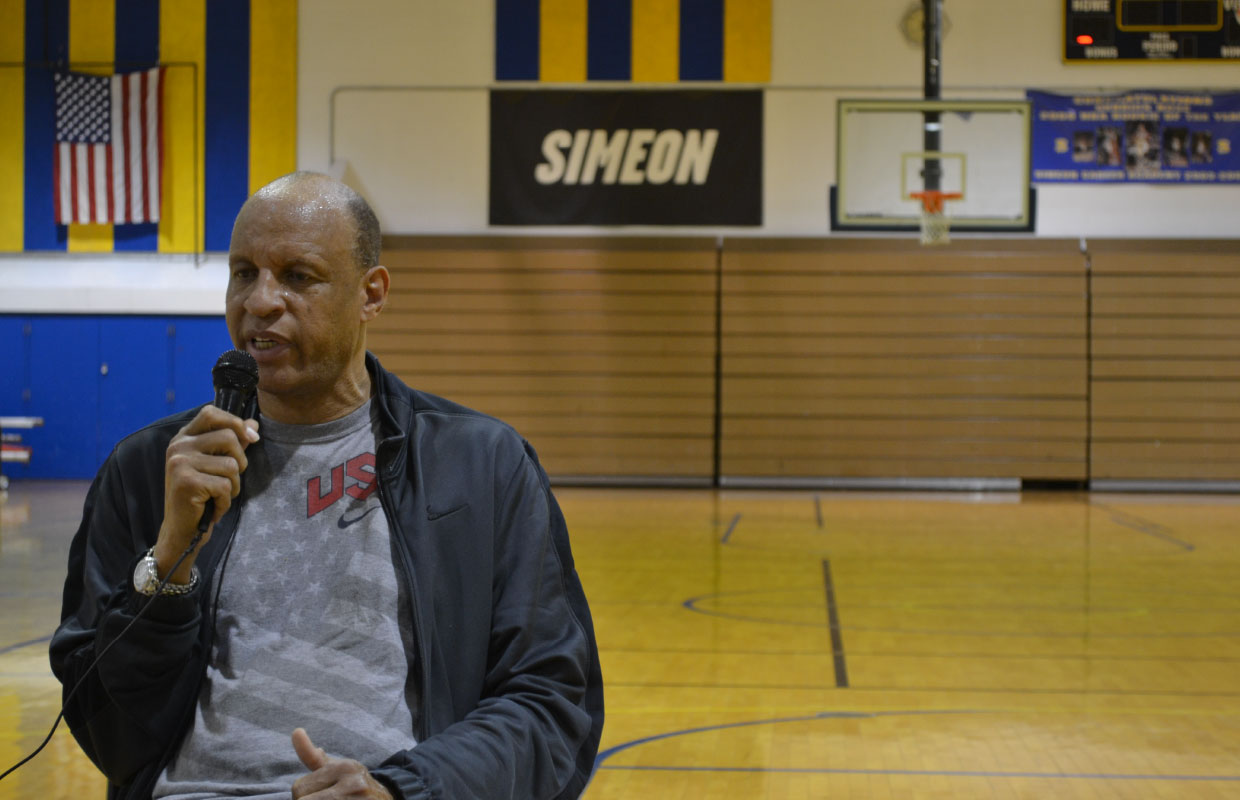 This is Jabari’s dad, Sonny Parker. The man is a walking historian of Chicago basketball. It was impressive to hear all the tales and how each area of the city has a different style of play. 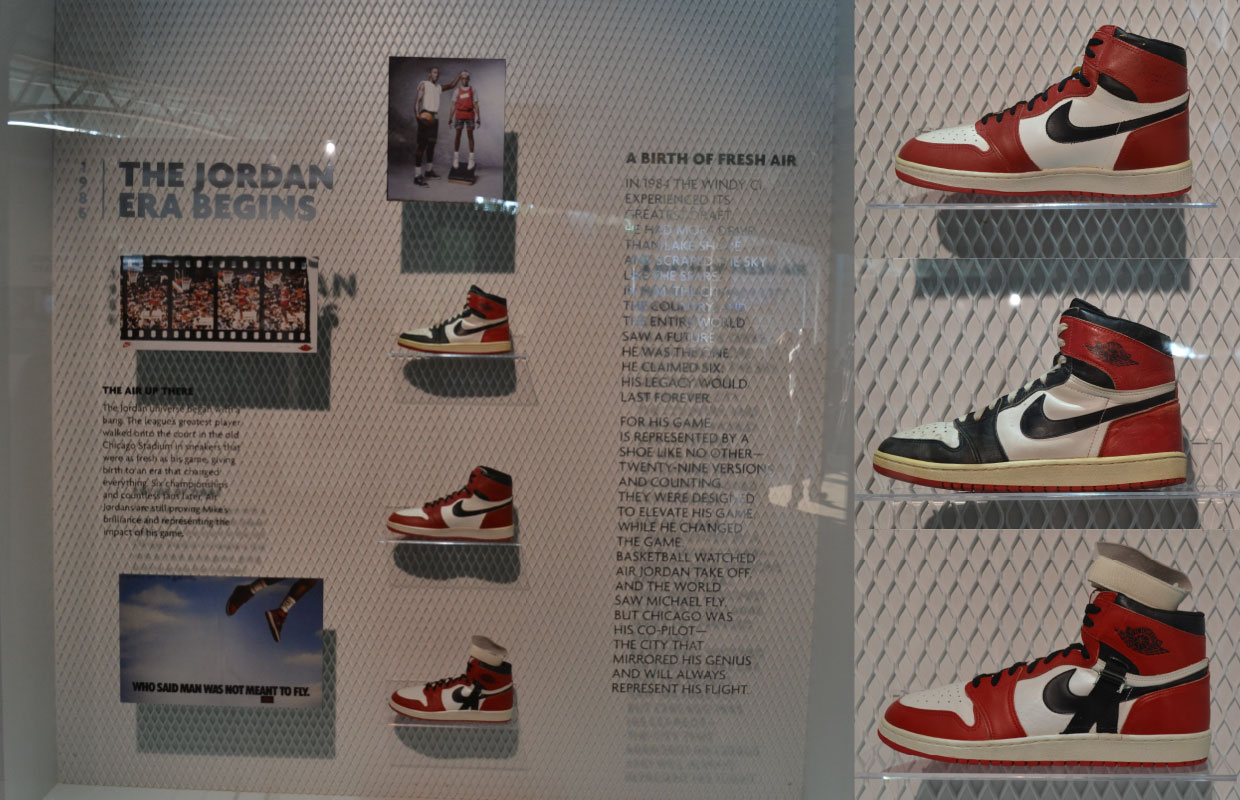 Next we went to the World Basketball Festival location at the Street Beach House. There we saw a timeline that is the past forty years of Nike Basketball. It was awesome to see the sample Air Jordan I made for Michael when he broke his foot. I have seen numerous photo’s of it over the years but never seen the physical pair. 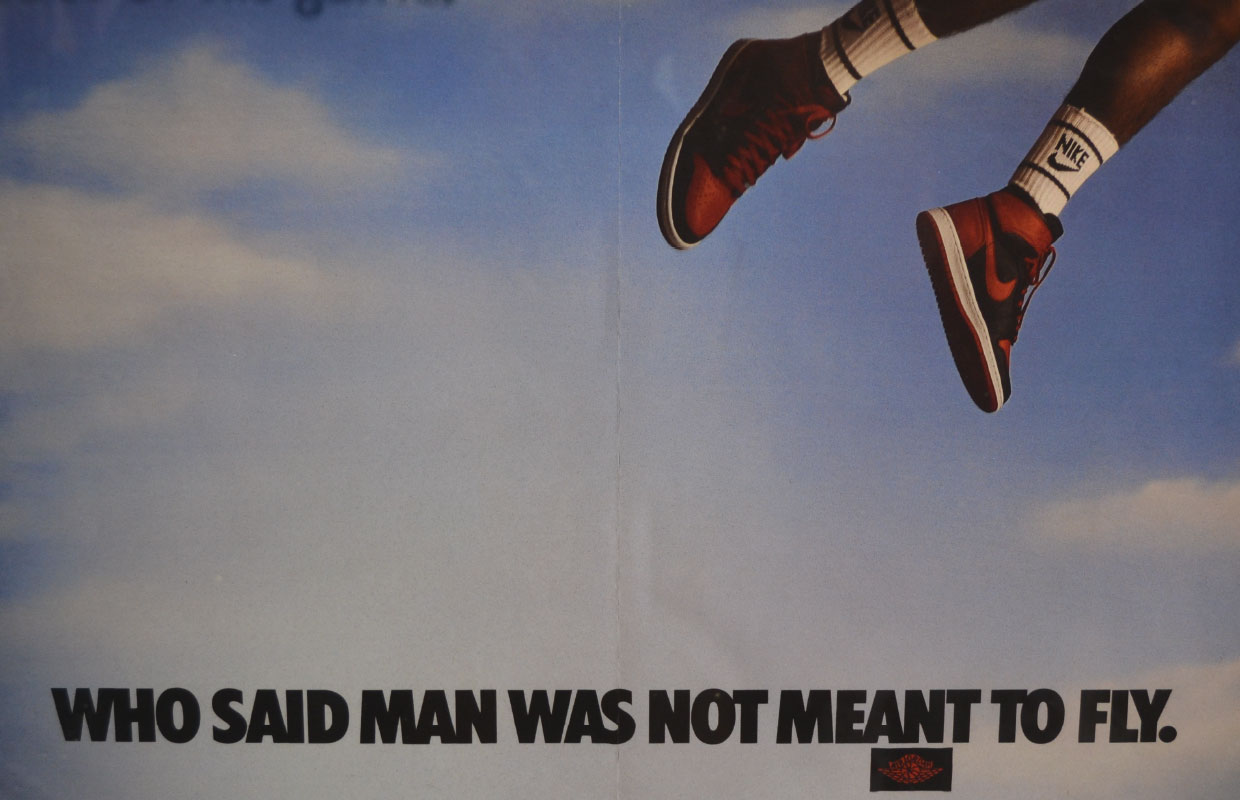 Some how some way this image will be blown up and be the size of my office wall. 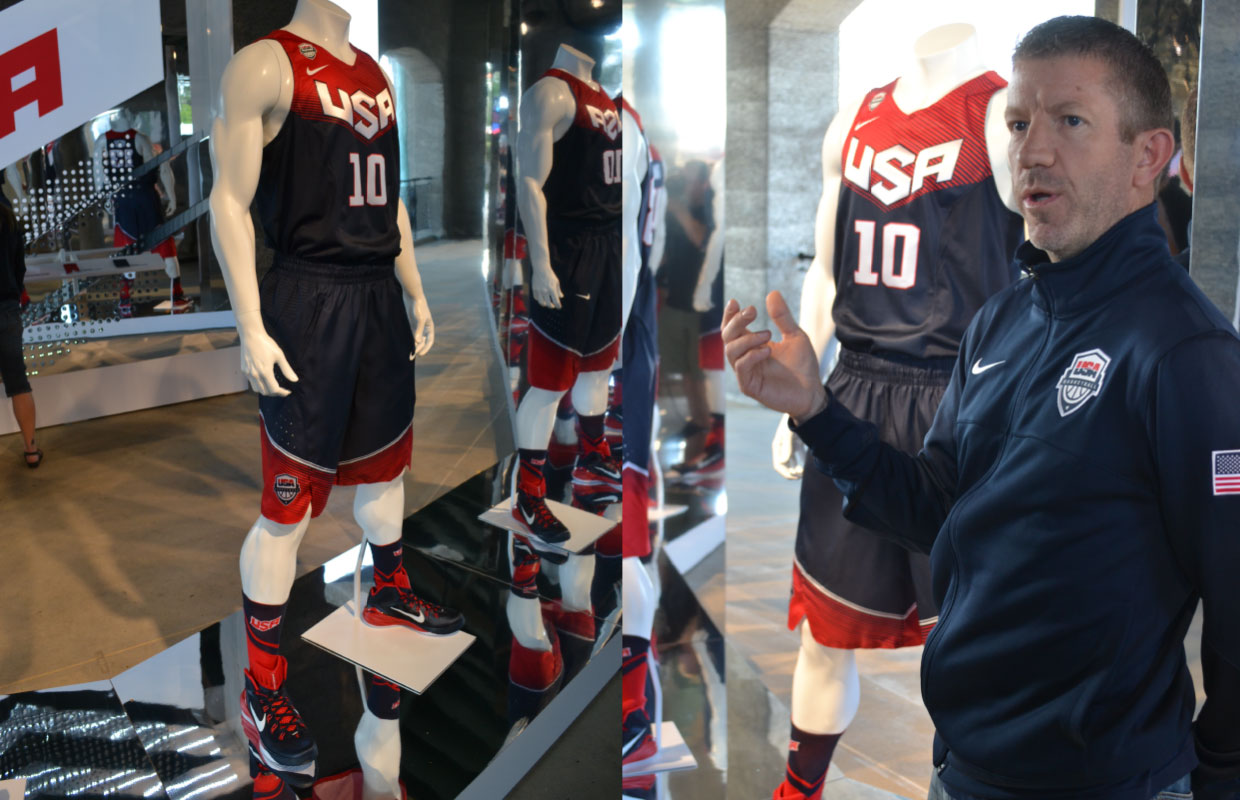 Learned a lot about the innovation that went into the USA Basketball uniform. Michael Smith, the director of Nike Apparel, was on hand to speak about the process. I had a 1:1 interview with that will go live within the coming weeks. So stay tuned for that. 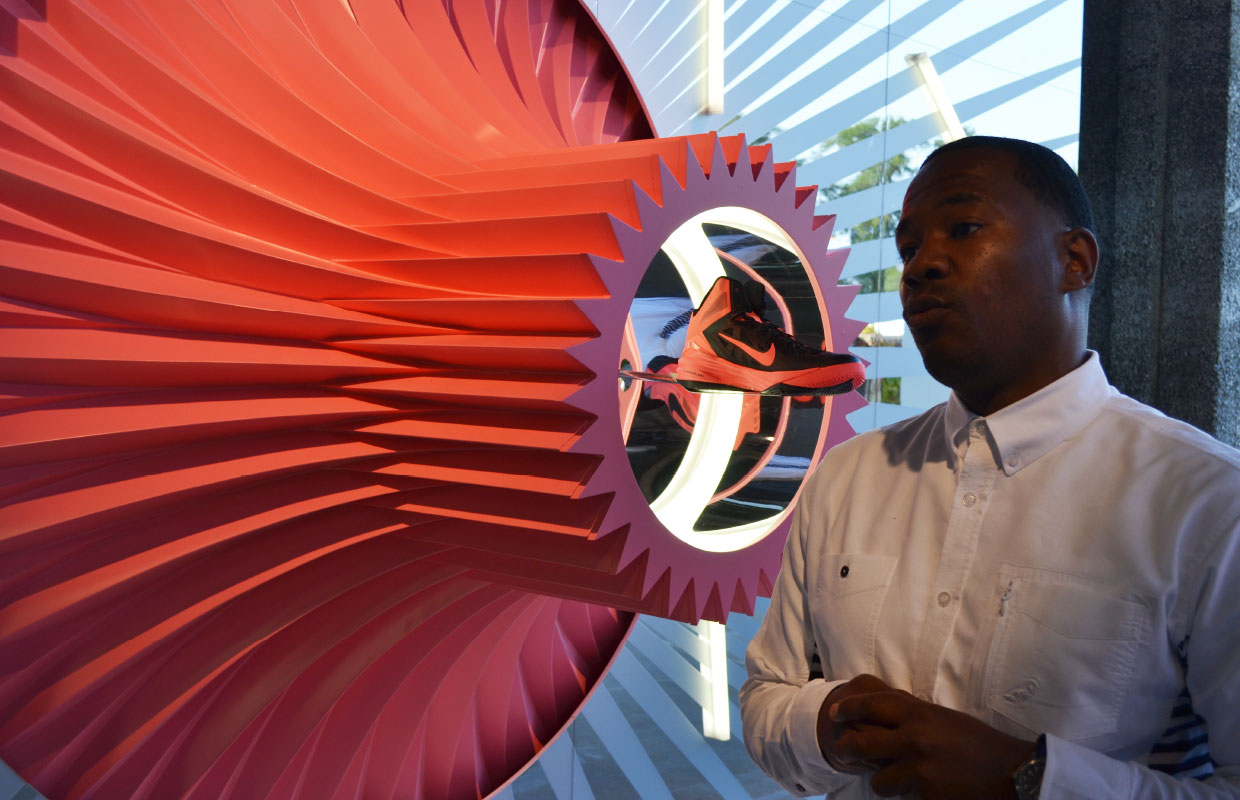 Charles Williams, Nike Basketball Product Line Director, was on hand to walk us through the new Hyperdunk. It was interesting because I was shocked at how much stake the brand puts in the Hypderdunk line. I guess I didn’t realize it or just took it for granted but since the first Hyperdunk, I never saw it as an elite shoe but Nike does and honestly after he walked us through the performance cues its hard to argue with. I was completely wrong as the shoe is built to be the best performing basketball shoe on the court. 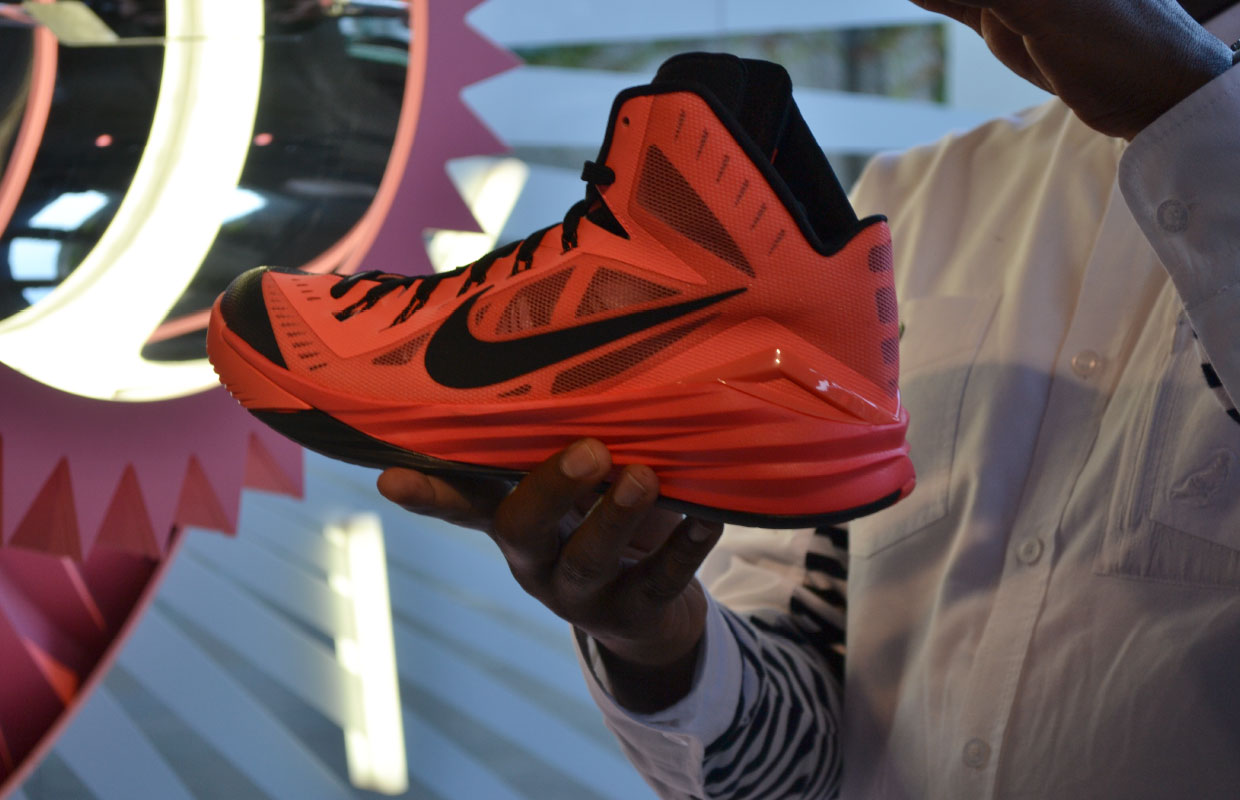 One fact that interested me most was that the Hyperdunk series was the first shoe to go away from leather materials and towards a completely synthetic upper. Their goal was to provide athletes with the most technological advanced footwear possible and to do that they new they had to invest in new materials. This birthed completely welded uppers that brought the shoe closer to the foot and the athlete closer to the game.

When I first saw the shoe I felt the color palette was more global, similar to the Mercurial line in Nike Soccer. I also saw it as more bold and dominant but I had wondered if the way it was blocked, lateral and medial, meant that it had a more specific color story. I was able to ask Charles and he replied that the main goal was to just be “provocative”. 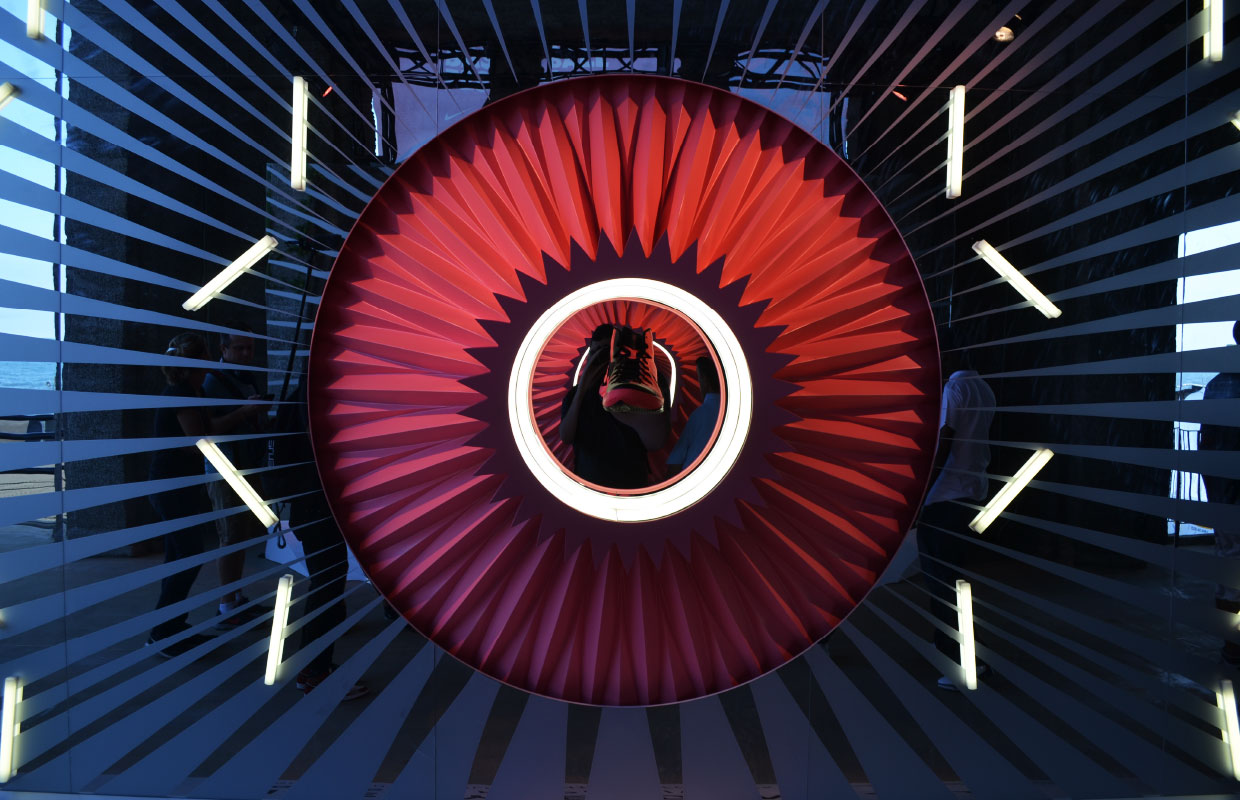 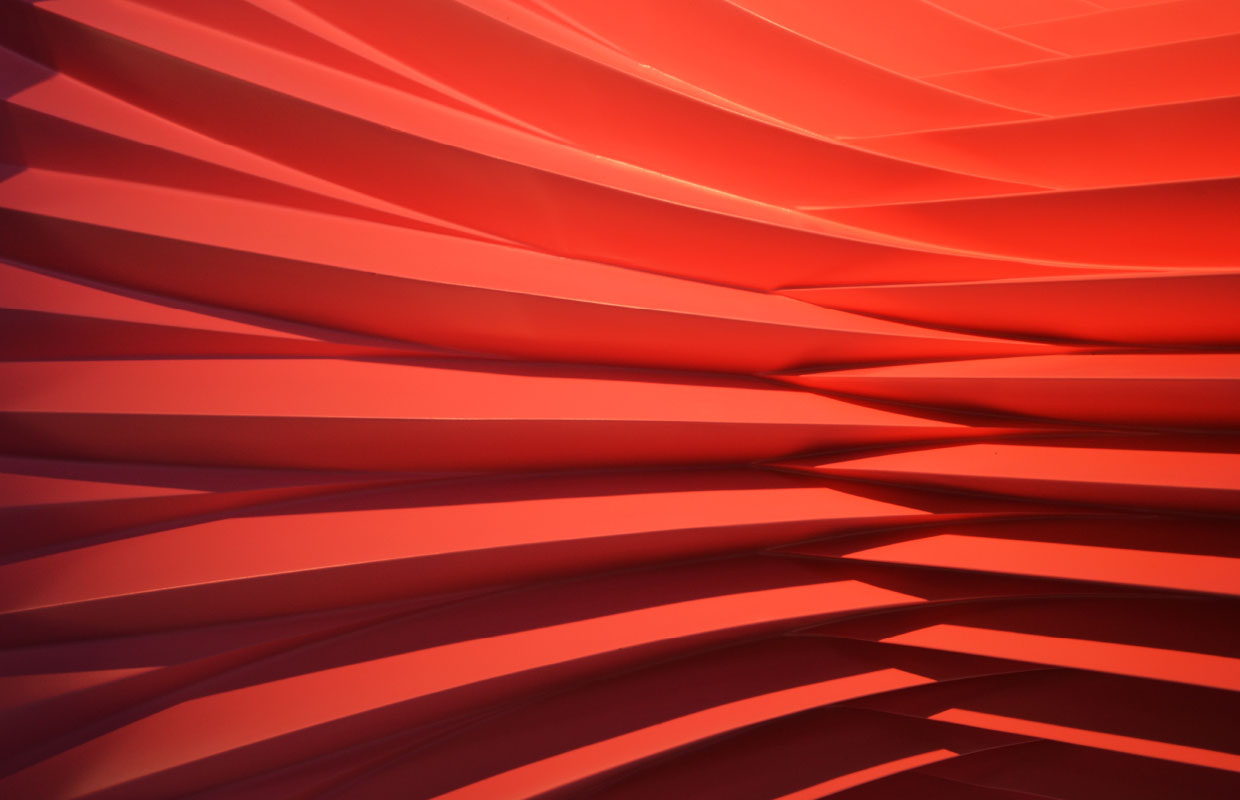 The display of the Hyperdunk was beautiful and quite captivating. 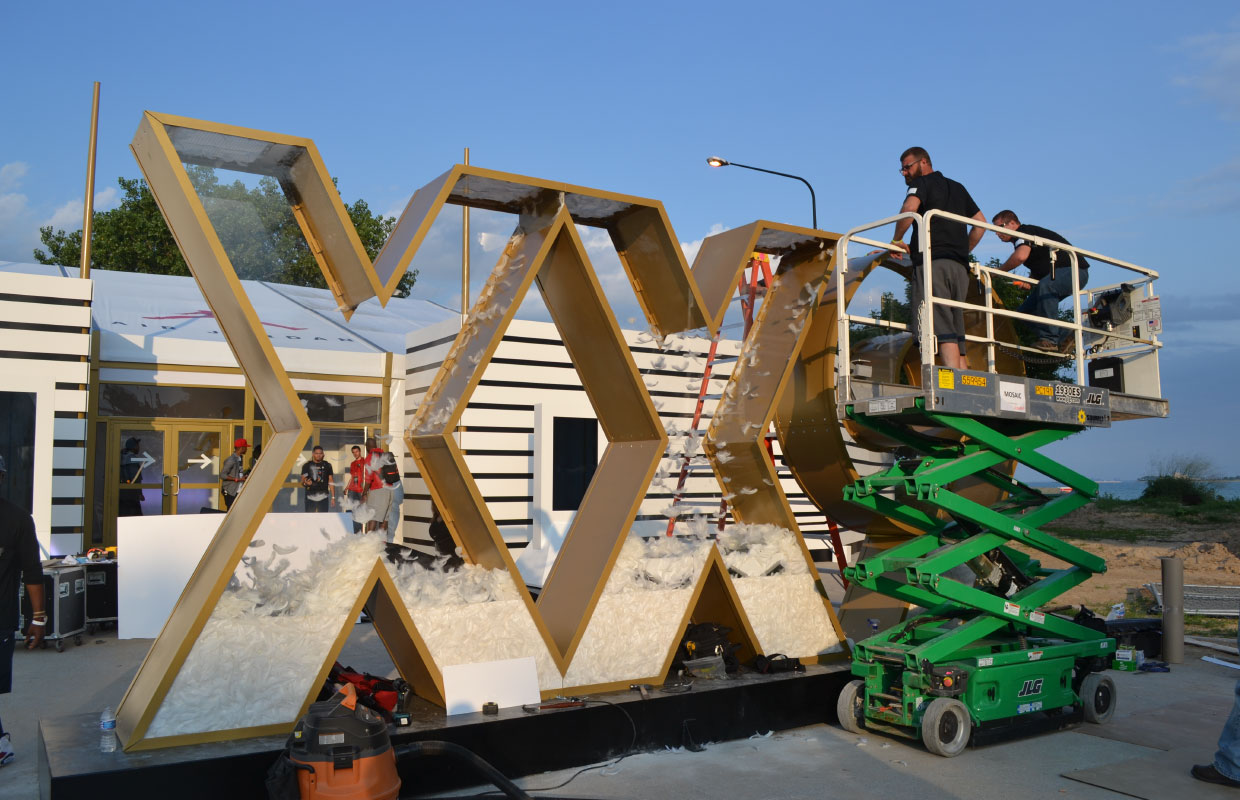 We made our way over to the Jordan area. It was in the midst of finishing being set up but it was pretty dope. The huge XX9 out front randomly shoots up feathers to subliminally tell their “Incredibly Light for Superior Flight” campaign story. 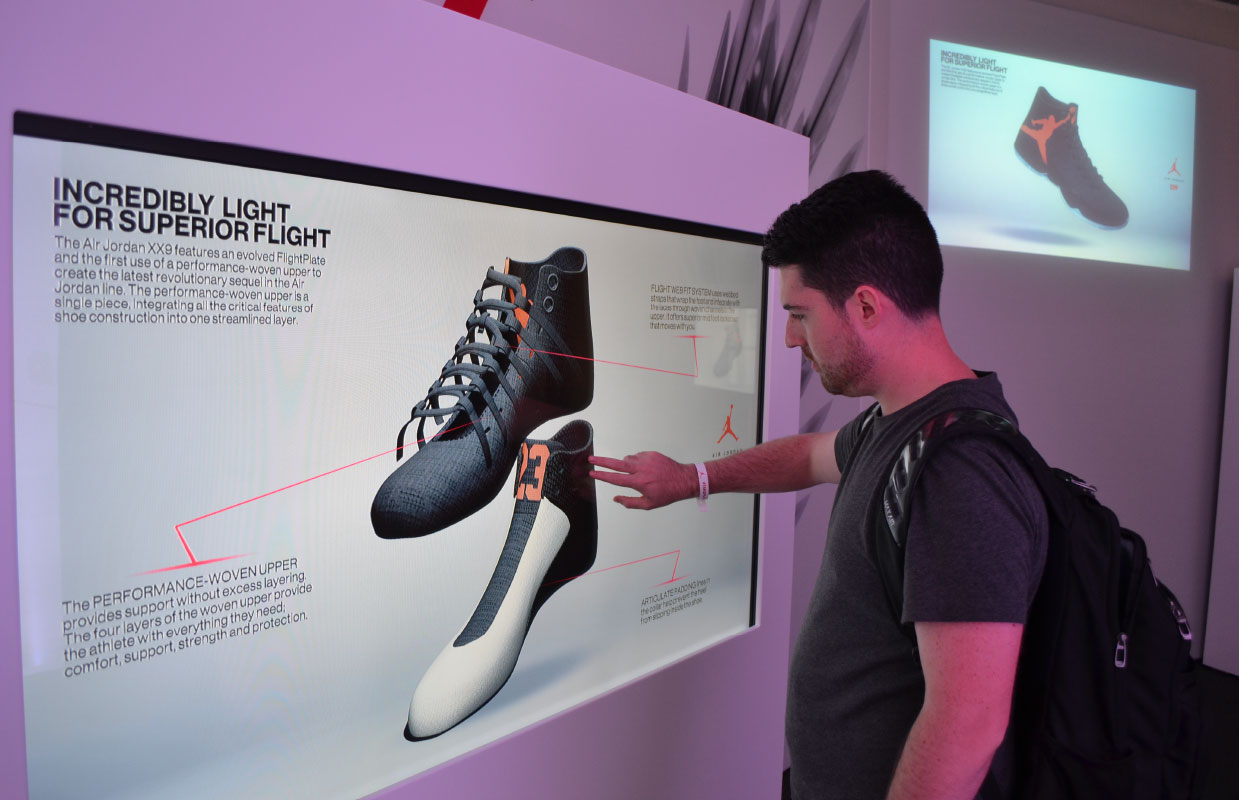 They had this amazing interactive screen that lets you move the XX9 around and interact with all the details of the shoe. If you are young shoe designer this was amazing because you basically build every layer of the shoe. It is really eye opening to the level of innovation the XX9 has at every layer. 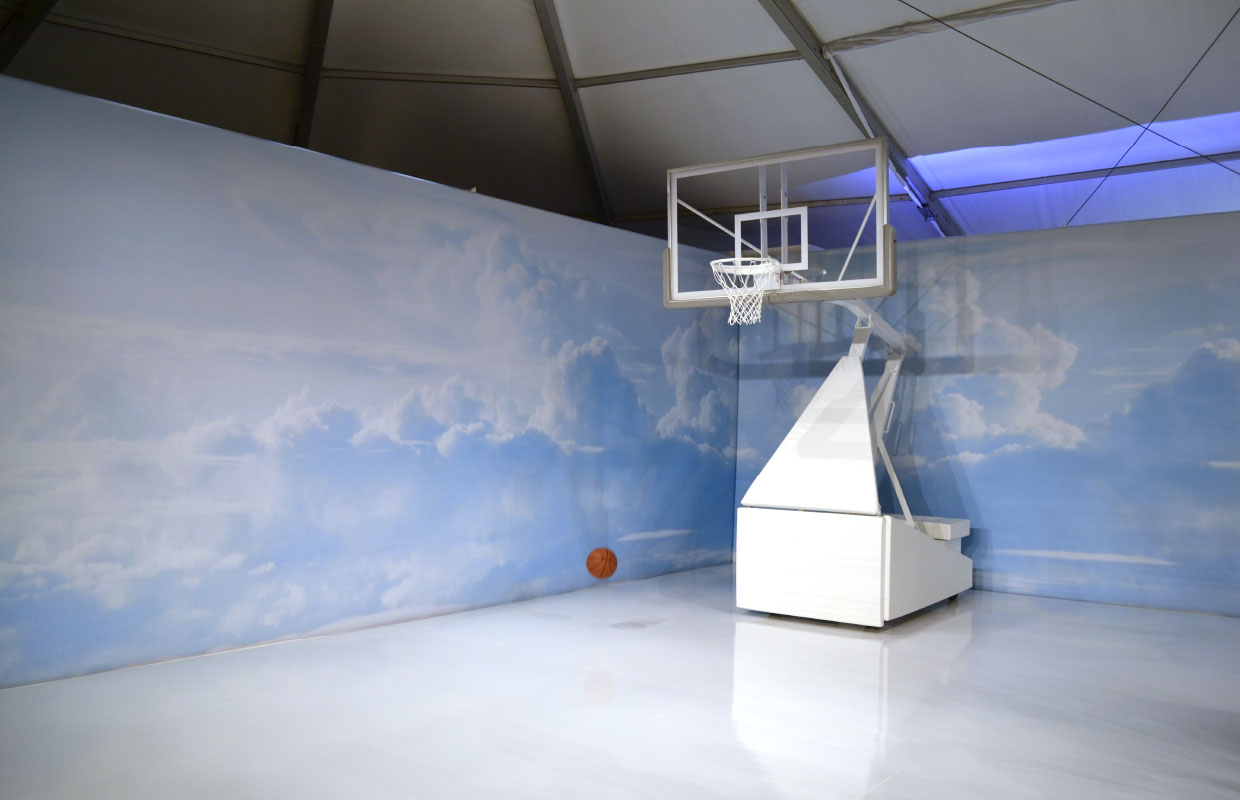 This court right here is where you test out the XX9. It’s all white and it is incredible. The cloud background is amazing and I would love to have the high res of that to put it on my garage wall or sneaker room wall.

The really dope thing about this area is there is 12 cameras that span vertically with the hoop that simultaneously take a photo of your action put a GIF together for you. So if you can knock out an ill dunk it will forever be captured. 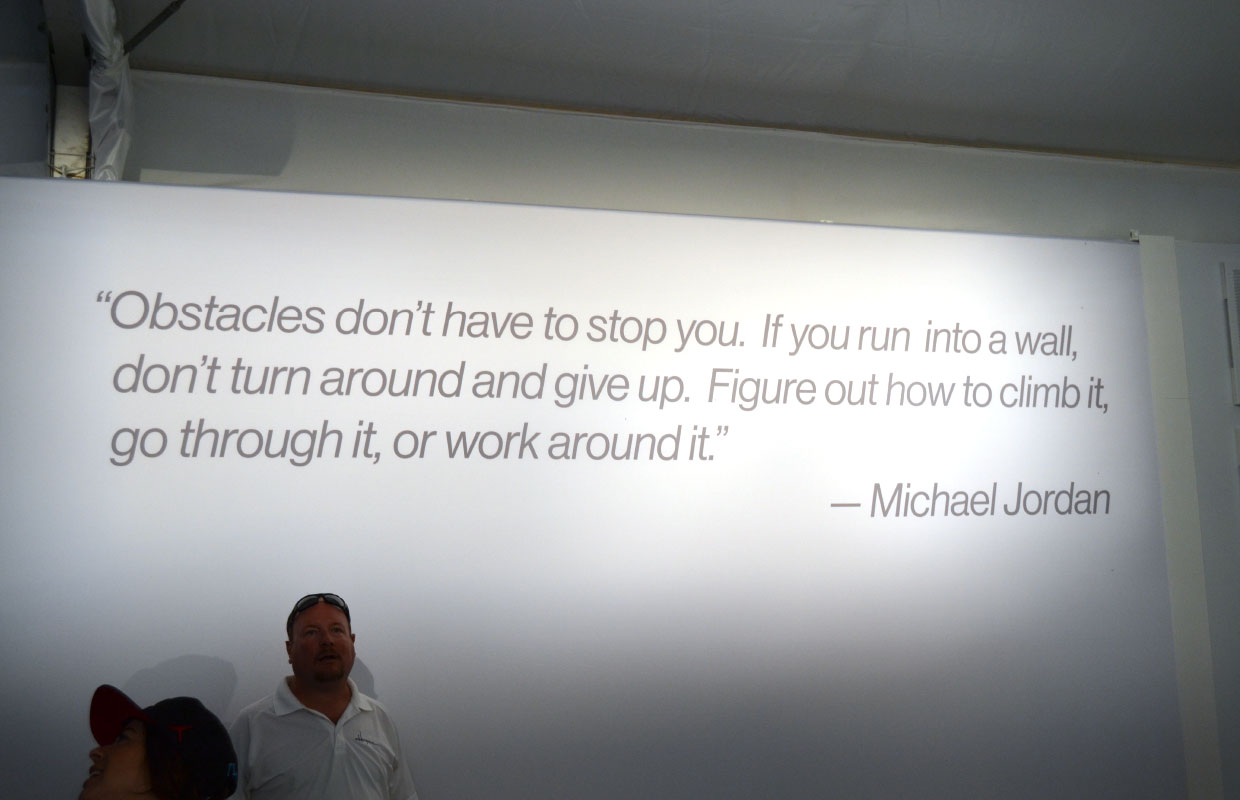 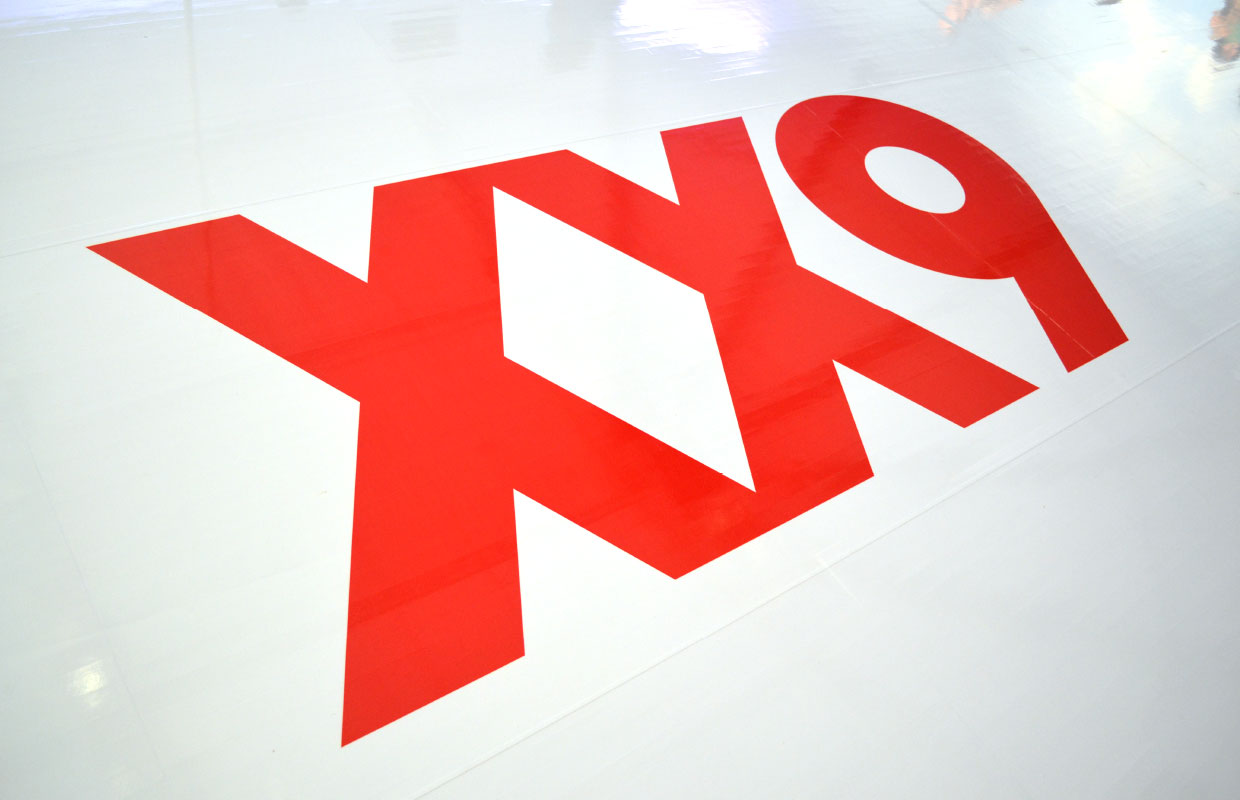 I must say I have been to a lot of these events and for the past few years Nike Basketball has by far been the focal point. Jordan Brand always rested on its legacy to propel it forward and there is nothing wrong with that but it didn’t tell what their new performance product was. It left you feeling like they were only about retro product. But since the launch of the Air Jordan XX8 you could see the pendulum swinging to where we are currently.

They are still dominating lifestyle product and have a brand identity that no one can compete with but most importantly, and I can’t stress that enough, they have the best performance product on the market two years in a row now. The XX9 is amazing and this event only showcases that. Not to say that Nike Basketball is not doing amazing product because they are but their area felt like the opening act for Jay Z. Which he doesn’t need one, so take that for what you will.