I have written about the Air Jordan XIII more than a few times in my day. To say that this shoe means a lot to me is an understatement. As much as I credit learning about Tinker Hatfield as the reason I found design as a career, none of that would have happened had this shoe not been created.

I own three pairs of XIIIs, which is one of the least amounts of the storied Air Jordan line that I own. I mean I have thirteen pairs of XIs but only three of my favorite shoe? How does that happen? Anyway, I own the White/Black retro from a couple of years ago (that I just shipped off to have something special happen to them, which you will see on a later date), an original pair of the White/Red colorway and most recently the White/Black-True Red-Cement Grey; also known as the “Grey Toes”.

Way back in the spring of this year when I heard that this shoe was dropping, the seventh grader in me came rushing out as I was overcome with voice cracking happiness. Back then, I relied on a little website called “NikePark’ – NikePark was NikeTalk before NikeTalk – and they put up scans and other various pieces of information from the catalogs that would be sent out to independent Mom & Pop shoe shops around the country. When I saw the scan of the XIII in the early fall of 1997, I fell in love with what was the “home” colorway of the XIII. I have always loved White and True Red together, since there’s something very pure about it. But, add Cement (Pearl) Grey to the toe? Good lord, that was so groundbreaking to me.

I went to my local shop, Bob’s Sports Shop located in beautiful Angola, IN, and instantly harassed them to see their catalog. They knew me well enough by then as I was always around checking out their stock. I very rarely bought shoes from them because I couldn’t afford them but they always treated me well. They knew my passion for the product. I would just sit around and talk with Bob and his son about the history of Jordans and Nike and all the memorabilia he collected over the years. Anyway, he gladly handed me the catalog and I stared at that little one by two inch image for at least an hour. I asked him when he would be receiving them and he said he didn’t know, which to my adult surprise, I accepted with great maturity and belief. Nowadays, I wouldn’t accept not having an answer for an answer. I seriously called him every week, sometimes more than once, asking for an update.

Then one day, I received a call from Bob. They had arrived. I instantly called my mom at work and let her know that we had to go to Bob’s Sport Shop when she was off later that evening. So when she came home, we went to the shop to see the shoe that would change my life. The whole ten-minute ride there (I am from a very small town) I was full of nervousness anticipation. On one hand, I was so hyped to see the shoe, an indescribable energy that I still feel when the new Jordan is unveiled. On the more realistic side sat this ill feeling that I knew I wasn’t going to be getting the shoes because they were too expensive.

Upon my arrival, Bob had a pair waiting behind the counter for me. He handed me the infamous, iconic and bold grey shoebox to take in what was inside….

An all White upper Air Jordan XIII with Red accents. Where in the fuck was the grey?

Now, I was more patient and proper as a seventh grader mind you, so I was just grateful to be in the presence of something so special. So I said nothing and just studied and looked and rotated and felt and stared. And then repeated that in different areas of light for the next thirty minutes until my mom had decided that the Air Jordan XIIIs and mine play date was over. As I handed the box back I mustered up the courage to ask, “what happened to the Grey?” Bob had no idea what I was talking about. So that was that.

To be honest I had no idea why the Grey didn’t make the shoe until many years later when Tinker told me that the Grey didn’t meet the NBA’s uniform standards. Which still shocks me but David Stern did far worse in his tenure. I will say though, I still loved the standard White/True Red that released. I loved the way it looked with the Black away Bulls uniforms. The contrast was just beautiful. But I have always coveted that original colorway. So when November 15th rolled around this year, I was flippin’ ready.

The emotions were still just as strong to get the shoes seventeen years later. Which I was actually surprised by because I must admit I have become a bit spoiled with shoes now that I can afford them. I know its wrong but it’s easy to take for granted getting a new pair. But this pair definitely took me back. This one is on a different level for me for many reasons.

In a way the shoe was banned from me and not just the NBA. Even if it had come out in its original intended form, I still wouldn’t have been able to get them. So to me this pair was meant to be. The journey from 1997 to 2014 was well worth it because now I can critique the hell out of it on B’s Desk.

So that was probably the longest intro ever to B’s Desk but it was well worth it.

I am not going to go in crazy depth here because I’ve talked so much about the shoe in many different articles on this site. But I am going to call out the key points you should know about the shoe.

The story that has been told is that the shoe was inspired by Michael’s little known nickname, Black Cat. The truth is that it was just a happy coincidence. Tinker had no idea of that nickname for Michael. Tinker brought the panther influence into the shoe while working from his home office and watching Michael play on TV. He felt that Michael played his game like a “predatory cat, the presence he has. Smart. Strategic. Opportunistic. That’s kind of the way Michael was playing the game to me. He plays basketball like he’s a predatory cat. Where he is lurking around the corners of the game. He’s always looking for that opportunistic of burst and speed and power.” By the way that quote comes directly from the podcast I did with Tinker on the Air Jordan XIII that can be found here.

From that inspiration Tinker drew a shoe that subliminally looked like a panther ready strike. If you look at the lateral ankle area, where the Jumpman23 hologram is, that represents the panther’s eye. Follow the organic pattern, the red suede, from the ankle into the forefoot and toe and most important the midsole and you will see the rubber pods that mimic a panther’s paw. The subtlest of the details is the white dimpled leather with the individual circle stitching highlighting it. This represents the whiskers. What is beautiful about this design inspiration is that it is not overtly blatant. Had Tinker literally made a panther on the side of this shoe it would have been terrible. Thankful he chose to have the inspiration be understated and allow the design to stand on itself without you having to be told. Which is an important lesson for all young designers, bold inspiration is best when it is whispered.

Next thing you should know is that this shoe was the first shoe, not just an Air Jordan, with hidden lacing. This may seem like a simple thing but it was revolutionary to the fit of the shoe. It pulled the upper closer to the foot and therefore provided better support. This design feature also paved the way for Flywire and most recently Dynamic Fit. It also created a very clean upper aesthetic.

Another classy move this shoe brought forth was the use of suede, not nubuck but genuine suede on the shoe. This was rare for athletic footwear. It added to the premium touch that became the legacy of the Air Jordan. What was dope about the use of suede was how they carried the suede on to the midsole, truthfully though it wasn’t suede that was used on the midsole. That is actually called flocking. Which is a sprayed material that is terrible for the environment but matches the haptic of suede. I can’t confirm it but Nike/Jordan probably used this because it would have been an insane cost to wrap that midsole with suede. Even in todays standards that would drive the price of the shoe to astronomical highs, if not higher, and durability on the basketball court would be terrible. Plus glue lines from the sole unit would be disgustingly challenging to control.

I am not that dude that gets crappy about retros not being “original” or anything stupid like that. To me retros serve the purpose of capturing an emotion of time that once existed and nothing more. They aren’t meant to be exact replicas they are meant to excite and take you back to a time when you connected with the brand in a different way. With that said, I was slightly disappointed that this shoe didn’t have the suede/flocked midsole this go around. It’s all good because this shoe is about the colorway for me but damn would it have been dope to have that. But at the same time it was that red flocking that caused the bleeding of color to happen on the white leather and also the white rubber herringbone pods on the original White/Red colorway. So take that for what it is worth.

The last thing you need to know about this shoe is…. it is fucking perfect in its color balance. The color takes you on an aesthetic journey as it makes your eye follow the asymmetrical design from lateral to medial to the sole to the toe and up the tongue. Very few shoe patterns take you on a flight like the XIII. It really uses color to balance and harmonize the entire design. And I think this colorway really illustrates that.

I have to say that seventeen years later and I am still as inspired by this shoe as I was when I was in the seventh grade. I am excited to say that it is my hard work over the last seventeen years that earned me this pair. For the most part my shoes stay in their box in my shoe room but this pair has a special area cleared in the center shelving area of my closet where I take it in every morning. It inspires me to aspire every day.

Take in the photos of the greatest Air Jordan of all time below. 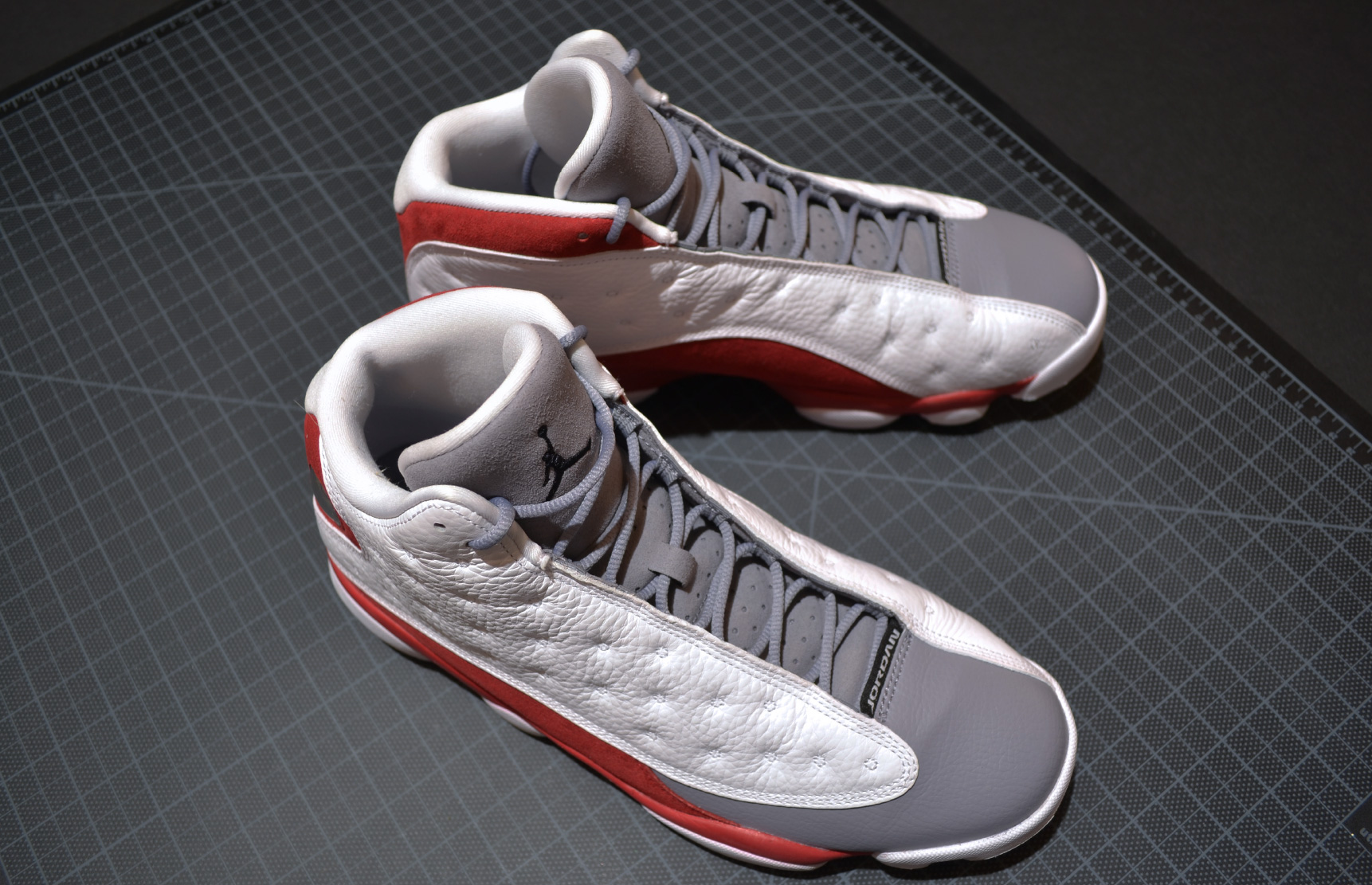 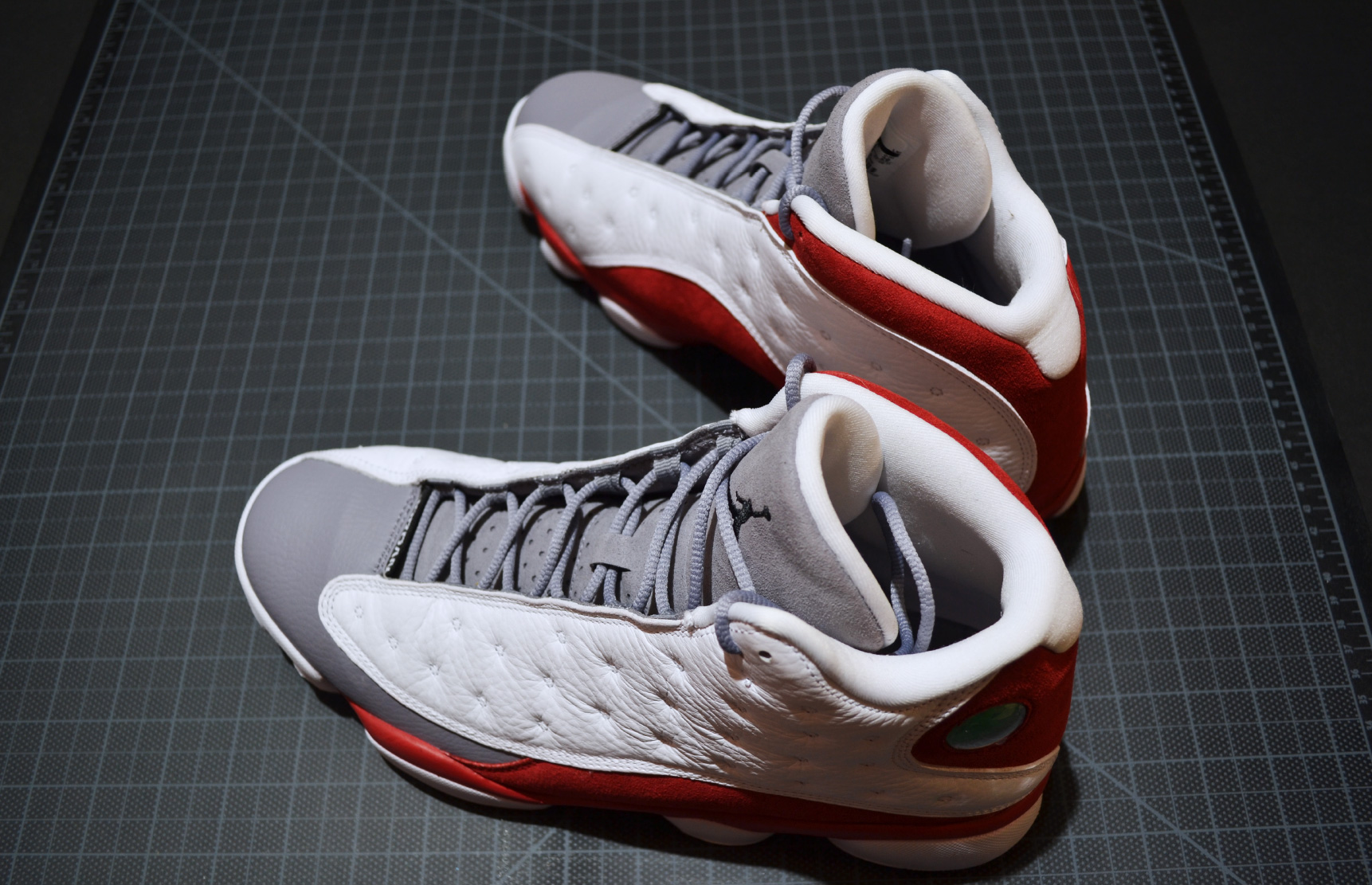 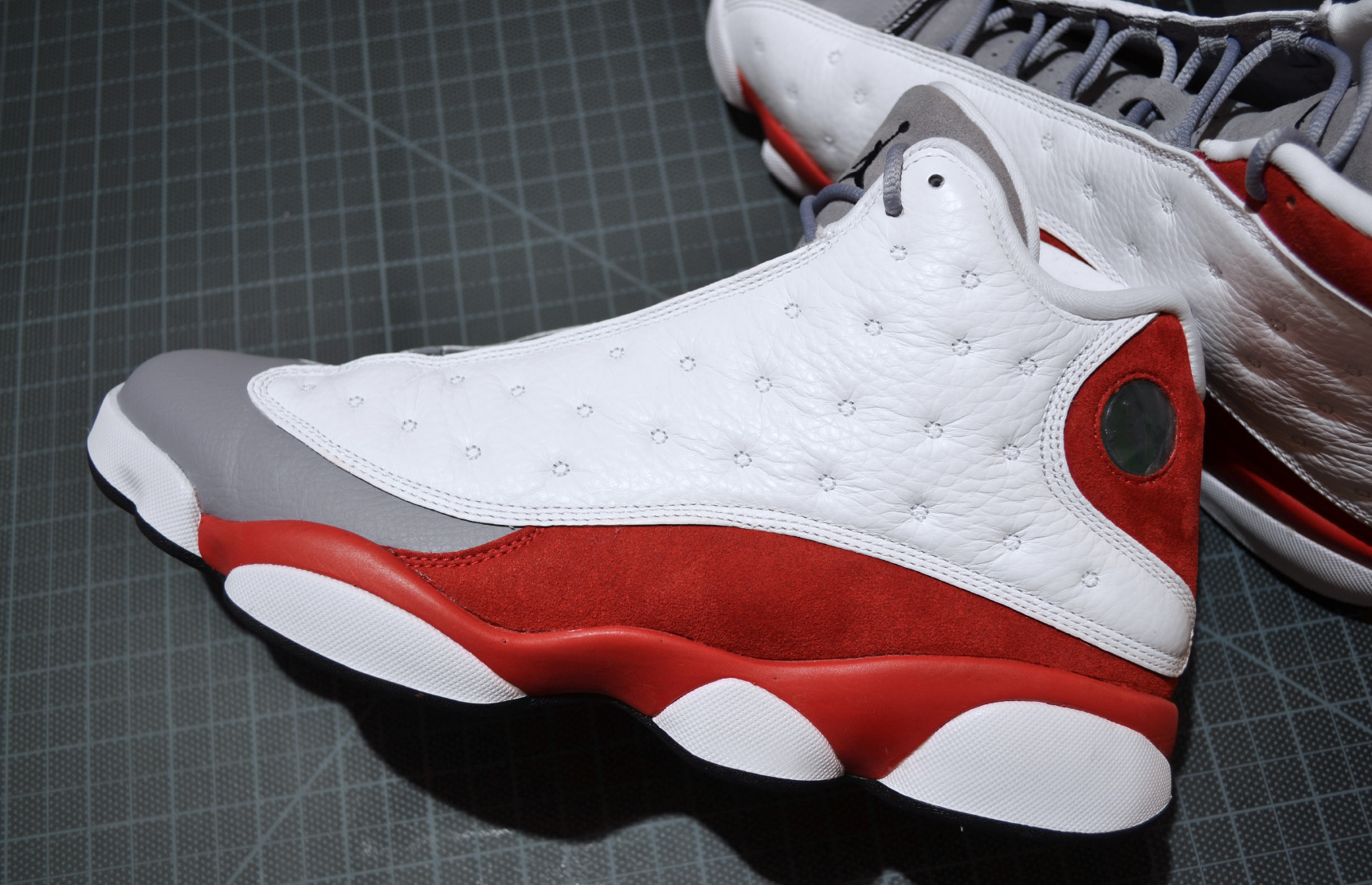 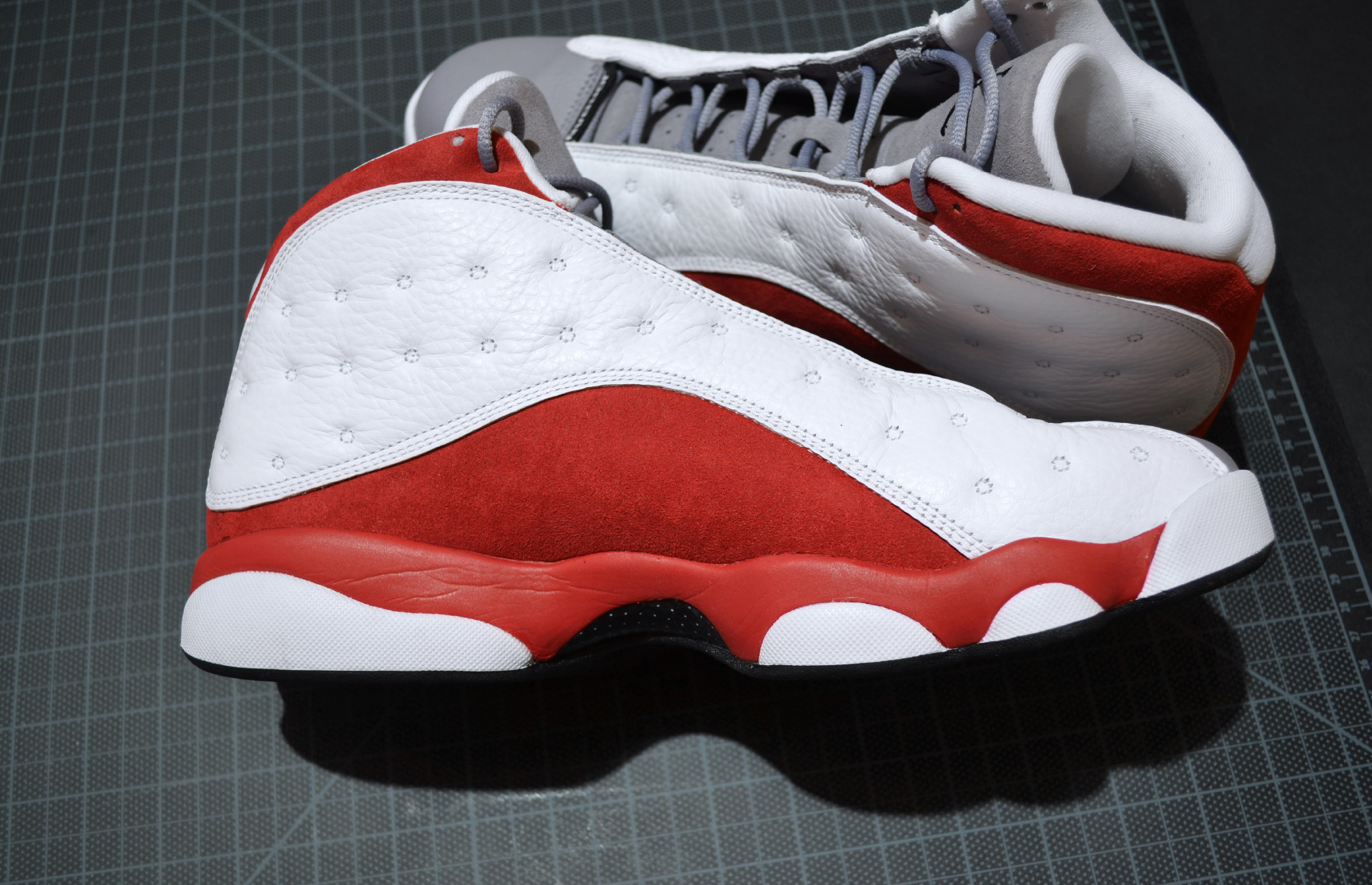 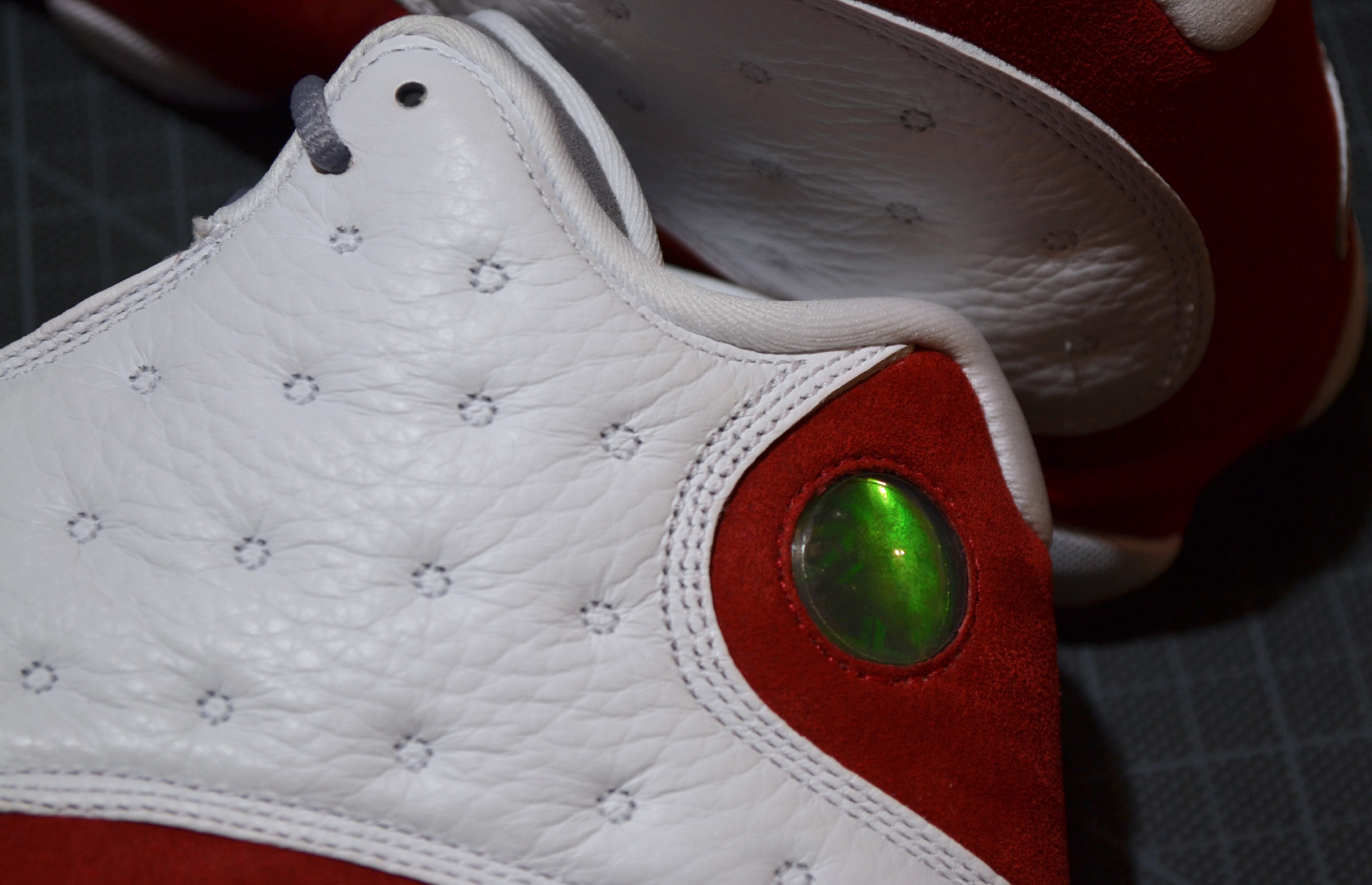 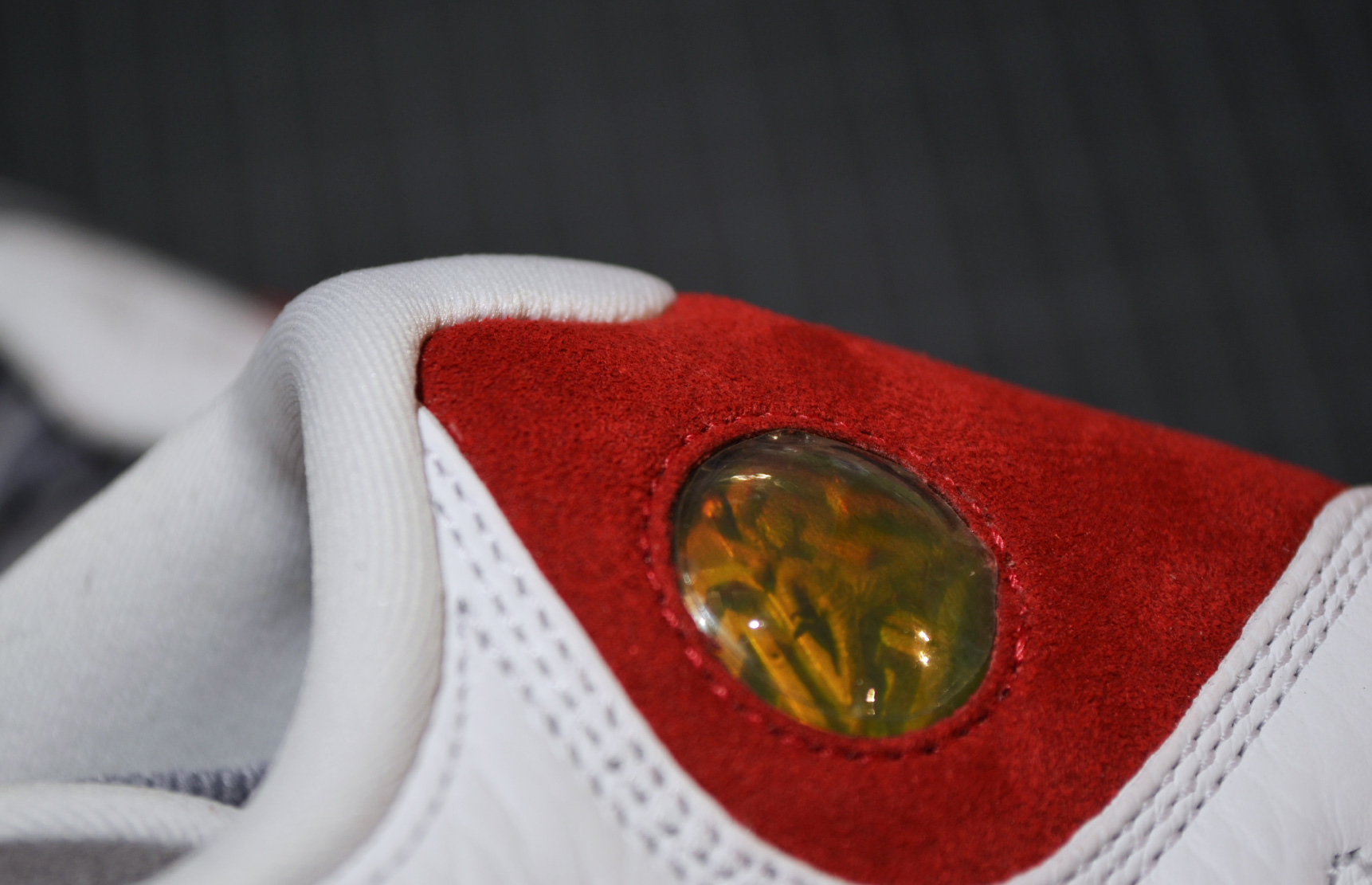 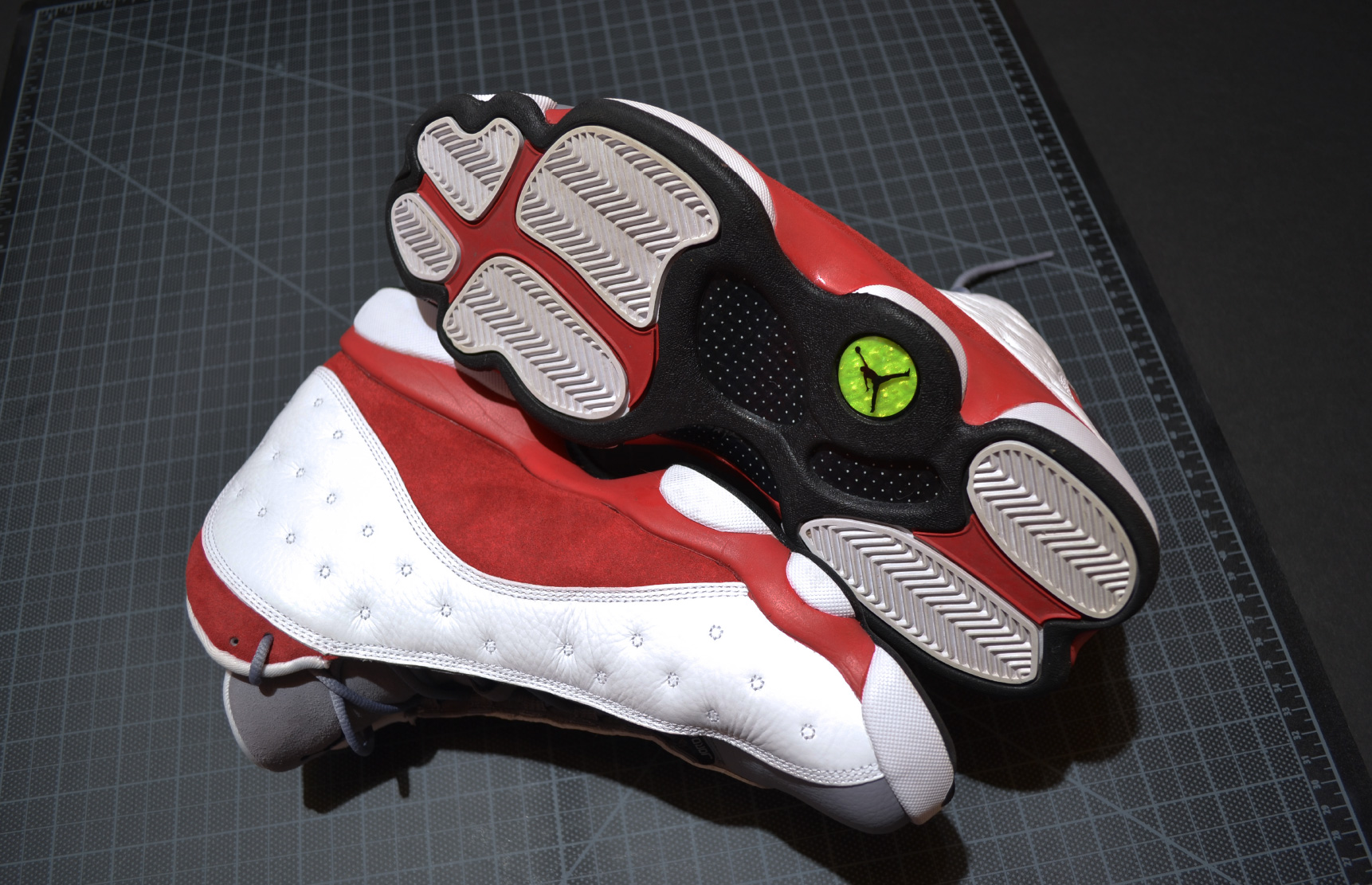 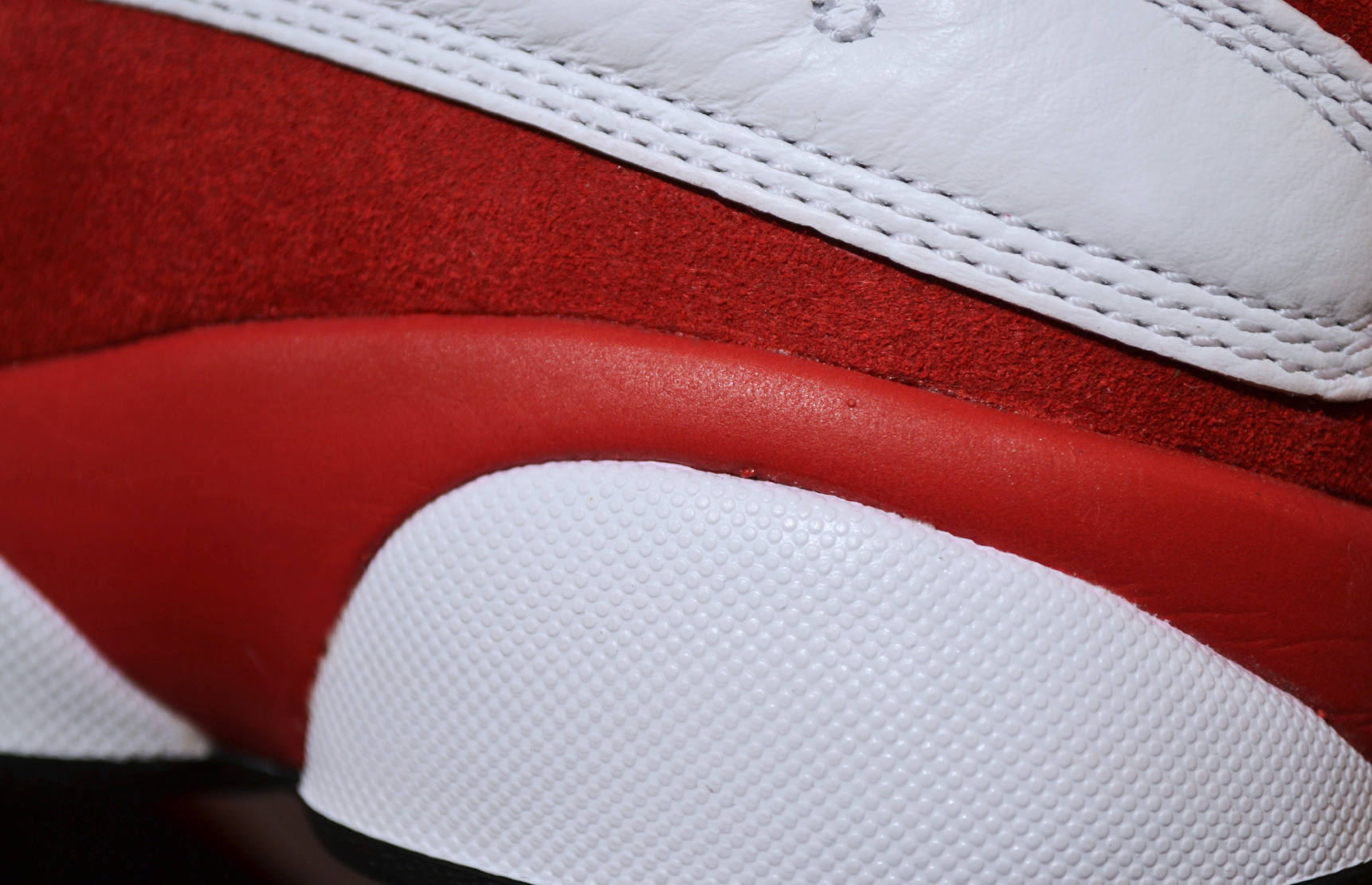 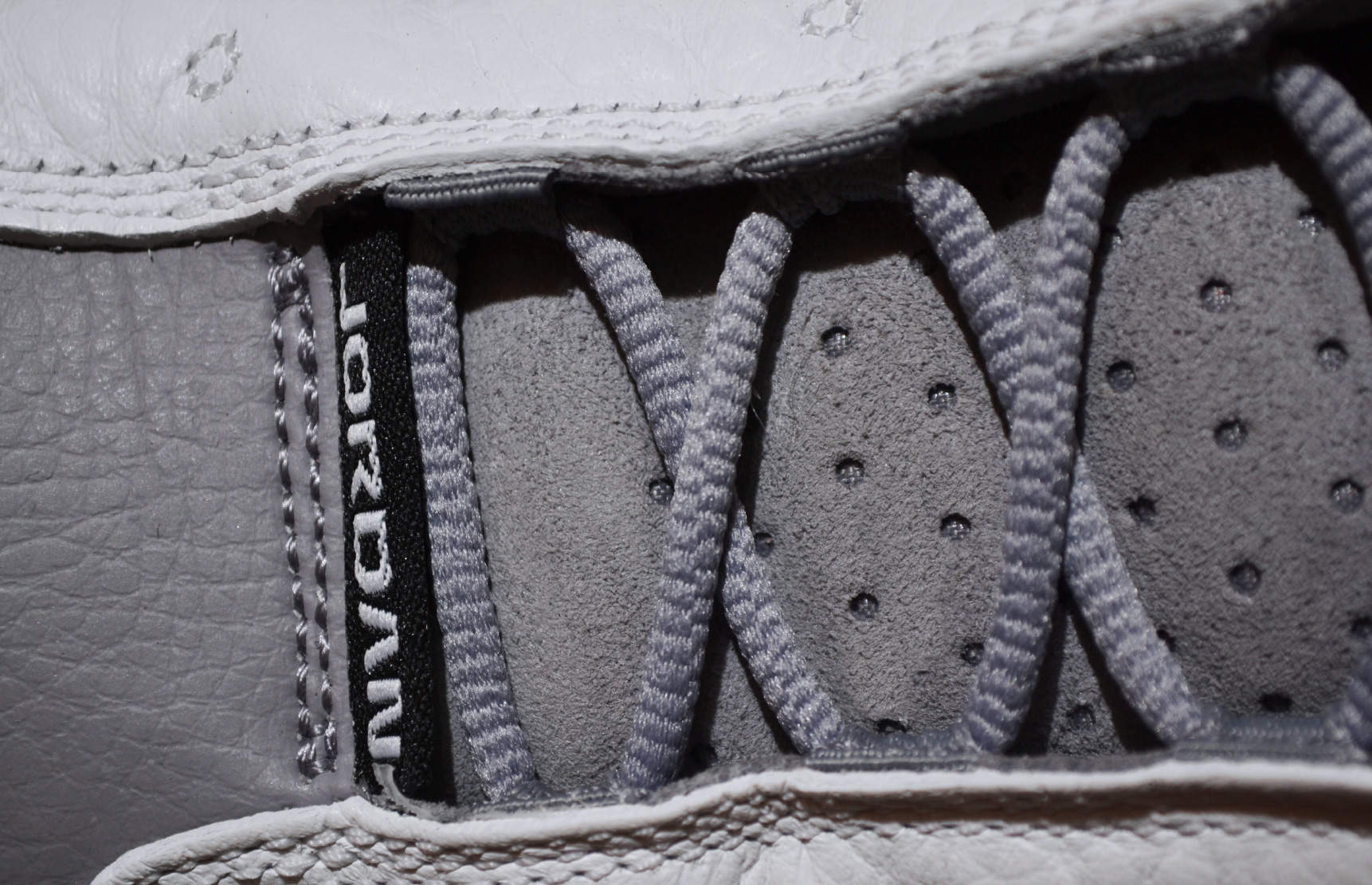 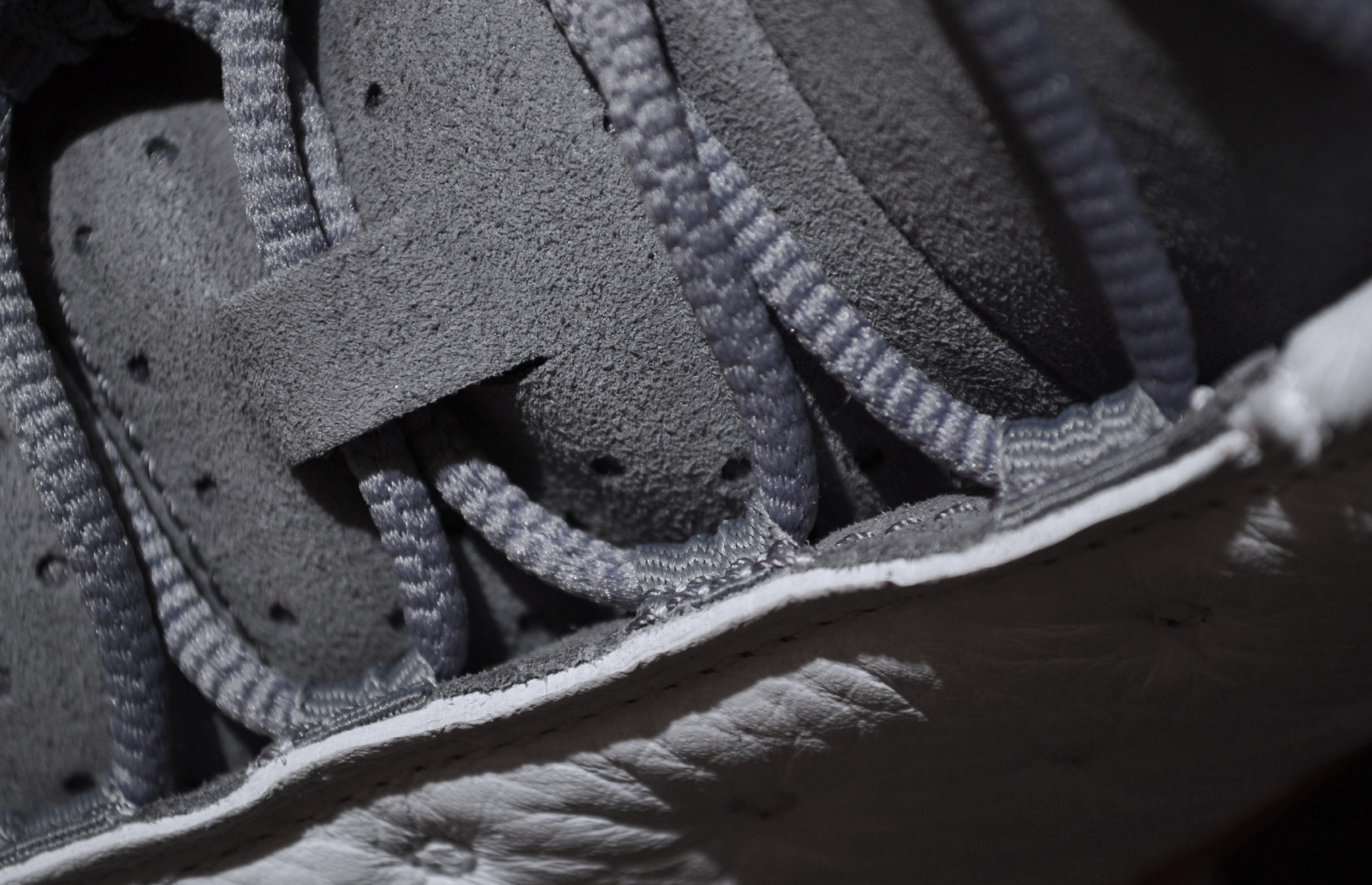