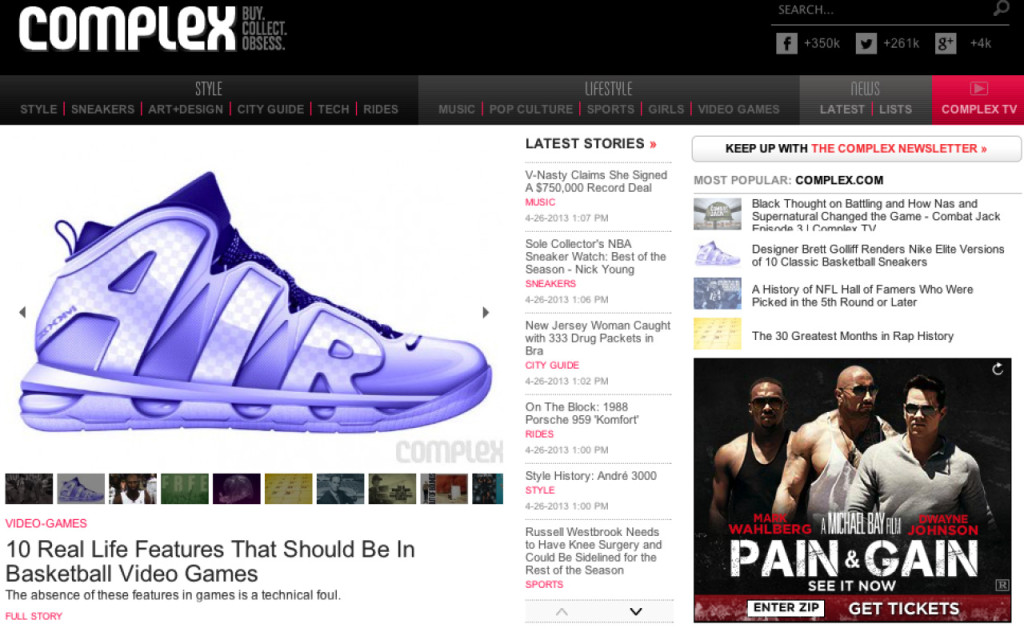 Last Friday my first post with the ComplexSneakers went live. It is to serve as an introduction to what is going to be a weekly series of mine on the amazing site. For my first post me and my good friend and long time Complex contributor, Brandon Edler, put together a list of classic Nike basketball footwear to give the Elite treatment.

This project was insane as I seriously did what would normally be about a months work in seven days. It pushed me both mentally and physically as I did not receive much sleep over those days but it was worth it. Not only from achieving what I feel was good design but also proving to myself that I can push out quality work in that amount of time. But honestly the biggest reward was seeing the sneaker world’s reaction. To say that it went well would be an understatement because it was a tremendous out poor of positive reaction. It was awesome and quite surreal. Thank you for all the love!

The other challenge of the project was picking the iconic element of each shoe that would remain. Almost all of the shoes I chose I believe to be an iconic design and is very heralded in the sneaker community. If I didn’t embrace them properly I knew I would be killed at a very public level. So what I had to focus on was what to keep and what to evolve. It provided a great challenge for me, as I didn’t take what those shoes meant to sneakerheads, but also myself, lightly.

On top of that I am a designer at heart and one thing that I love to do as a designer, is figure out exactly how to make the shoes a reality. I knew because I was on such a time limit that wouldn’t be possible, so I had to balance between creating fiction and function. So not to say that function was out the window, because it wasn’t, but I did have to focus on capturing a vision of what the shoe could become. So basically these renderings serve as inspiration points for where I felt the designs could go.

I thought I would take the time to not only show the sketches that went into the final renderings but also break down the overall goals of each sneaker. Check out the first five below and come back tomorrow for the final five! And if you haven’t seen the full article on Complex, you should probably go do that as well.

The Pippen 2 is one of my all time favorite shoes. It was the first real signature shoe I ever had as a youth and it was the first shoe that I remember being attracted to because of how clean and simple it was. To me that notion is not an easy task. To keep a design pure takes a lot of focus and intent because you have to make your lines very dynamic and awe striking. That was the challenge for this shoe, maintaining the dynamic simplicity the original possessed.

I wanted to balance the strong graphic that was already created in the original but update it in a way that made since. The natural notion for me was to make the inner-bootie construction of the original the focal performance element of the Elite version. By choosing to go this route I decided that it would be wise to visually highlight it and I felt the most dynamic way to do this was to make the shoe a low top. Not only did that provide a loss in weight but I also think it helped update the visual proportion of the shoe to be competitive in the current basketball landscape.

To help aide that support I made a full carbon fiber shank plate and also a carbon fiber heel clip. Those two elements interact with the TPU support rand from the original shoe to provide a firm but contoured structure around the foot. I also chose to break up the one piece rubber sole unit the original featured and make it more podular.

Out of all of the shoes I created for this feature, this one is probably my favorite. Or possibly the Air Jordan XIX but more on that later…

I chose to update the Shox BB4 because it had such a statement when it originally released. At the time, it was the next wave of visual technology and it really captivated me. I have always wanted to have a chance to update what the Shox Pillar could look like and that is exactly what I focused on with this shoe. I wasn’t overly concerned with the upper as I knew I was going to keep it clean so it highlighted the Shox platform, just like the original.

I started out by sketching a variety of shapes and forms for what the column could evolve to but it really didn’t take me anywhere. Then I started looking at modern furniture and saw a chair that was really pushing what dimension could be within a form and visually it reminded me of compression. So I sketched it out and kept reworking it to proportionally work with the heel of the foot.

The one thing that I never liked about the original Shox was how little give it gave you. I felt because it didn’t compress very much it almost made it dangerous. So as I was updating it I focused on using two densities of foam, one that is firm, Phylon; and the other that is supple, Lunar. The idea is that the Lunar would be directly under your foot and therefore providing instant cushioning while the Phylon absorbs and sends energy back into your step to propel you forward.

From a design standpoint the upper of this shoe was the most rushed as it was the last one created. The platform I had already created for the Shox Stunner (which I will breakdown tomorrow) so it was carryover so to speak. I think both the Shox platform and upper can use some refinement but I think they capture what the vision could be.

This shoe to me was the one that I don’t think many were expecting to be updated. The XIX doesn’t get a terrible amount of love, not only from the sneaker community but also from myself. There was elements of that shoe that I thought were spectacular but overall the execution was lacking and I always wanted to the chance to use the TechFlex material that was in the shroud in a way that actually makes it function.

While I know it would be a challenge to manufacture in real life, the overall goal was to make a FlyKnit upper that is knitted with the plastic TechFlex material. What I loved about the TechFlex in the shroud is how it compressed when it was bent and because it was woven, certain areas would lock together to provide support. In my Elite version the idea is that by having the TechFlex woven in with FlyKnit that it would lock you in, kind of like a Chinese Finger Trap, as you move. You wouldn’t have to have overlaying materials; essentially you would have a sock for an upper. I think it could be pretty amazing.

I also experimented with color a little more on this one, as I wanted it to be woven from the colors that reflect in the NBA Championship trophy. It is an abstract inspiration but I thought it would be cool to see gold, black, white and red all woven together to visually create the rich saturated colors that are found in the trophy.

This was the first shoe on the list that I never owned. I have always respected the shoe and thought it was a great design but from a personal standpoint I thought it was bulky and thick. I have always been into more agile and lightweight footwear but I respected the reason it wasn’t that way. It has to support a very large athlete. So I focused on maintaining the structure and presence it already has but tried to make it less bulky.

Instead of having lines that were heavy and thick and overlayed each other I focused on creating lines that were zonal and dynamic. Each line leads to an area or zone of function, either to aid in support or to allow flex or airflow. The biggest visual update the shoe received was the Dynamic Flywire. I felt like this was a natural choice, as it would alleviate the thick straps that the original had but still would maintain the intended purpose of those straps.

There were three shoes that gave me some serious challenges and this is one of them. I had a very hard time figuring out how to visually update this shoe and still make it impactful. I didn’t realize it until I started working on this project but the original HyperFlight was way ahead of its time. A minimal pieced synthetic upper that is supper clean with a large TPU support and features a dramatic collar line, that is pretty much what every shoe is today. This shoe is like the grandfather to the Hyperdunk line, the Kobe line, the Hyperfuse line and the KD line. So I really had to work hard to figure out where this shoe could go.

I started out sketching a variety of things of what this shoe could become. I started out focusing on an engineered mesh upper with a weld that would allow the sole unit to adhere to it. The idea would be that this would allow for it stay double lasted like the original and have a drop-in midsole set up similar to the Kobe line. But it just didn’t feel right. What I kept coming back to is the notion that the modern version of this shoe would be a lot like the iconic Nike Running LunaRacer. It would be transparent mesh that would have an internal support frame and instead of having Flywire like the LunaRacer, it would have a carbon fiber version of the original HyperFlight’s midfoot support piece. So I kept pushing to achieve that graphic.

Overall I think I accomplished the goal of making it a modern LunaRacer but I am still not overly in love the collar line. I don’t think it is dynamic enough but that is a tough collar to update, as the original was so unique. I do think that an all gold upper that has transparency to it would live up to the originals glossy upper though.